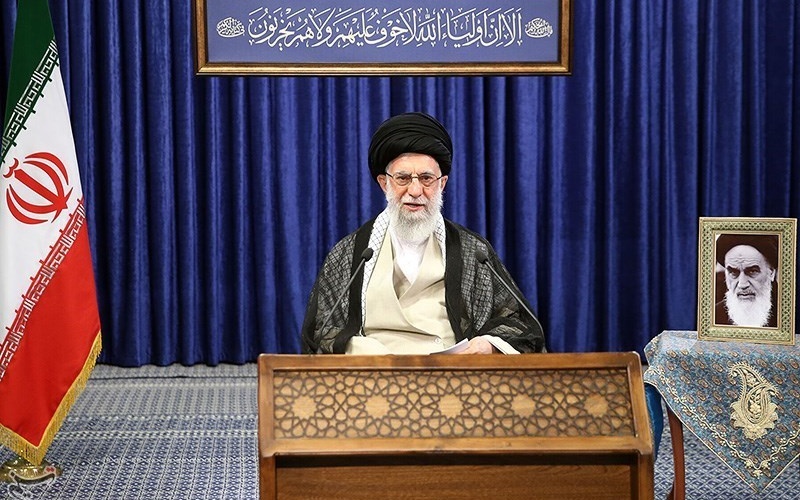 Betraying possible concern over participation in the June 18 Presidential ballot, the Supreme Leader has said the casting of protest votes is forbidden.

Ayatollah Khamenei’s office posted the fatwa in its weekly magazine Khatt-e Hezbollah: “Casting a blank ballot is haram if it weakens the Islamic system.”

More information from Iranian sources about the Supreme Leader’s speech and the Guardian Council’s reaction….

The sources were unsurprised by Ayatollah Khamenei’s attempt to balance between the bans on Presidential candidates and reassurances to them, notably through the statement that they had been “wronged” by aspersions on their characters.

They noted that Khamenei’s speech was not a sign of restitution, with the the lifting of the bans, or even an admission that the system had failed. Instead, he blamed the Internet and media for the injury to the barred candidates.

What is provoking uncertainty is Khamenei’s timing, or even why he felt he had to make a public statement. One explanation is that the Supreme Leader is mending fences with the bloc around former Parliament Speaker Ali Larijani, who may have a chance of victory against hardline favorite Ebrahim Raisi.

The sources also considered signs of division within the Guardian Council. Initially, the Council spokesman promised a response to Khamenei within the hours. It did not appear for several hours.

The statement did not reverse the disqualifications. However, the Council vote was not unanimous. In the 9-3 decision, one of the No votes is almost certainly former judiciary head Sadegh Larijani, the brother of Ali Larijani. But who are the other two?

ORIGINAL ENTRY, JUNE 5: Iran’s Supreme Leader has risked throwing the June 18 Presidential election by saying that banned candidates were wronged — even as the ban is maintained.

Last week Ayatollah Khamenei supported the Guardian Council’s disqualification of all but 7 of 592 applicants.

But on Friday, the Supreme Leader declared in a speech in Tehran marking the anniversary of the death of the Islamic Republic’s founder Ayatollah Khomeini:

In the vetting process some candidates were wronged. They were accused of untrue things that were unfortunately spread throughout the internet too. Protecting people’s honor is one of the most important issues. I call on the responsible bodies to restore their honor.

After Khamenei’s speech, the Guardian Council insisted that it would not change its decisions: “While emphasizing the preservation of the dignity of individuals and condemning the desecration of the candidates and their families, the Council urges media outlets to respect confidentiality.”

One of the accepted candidates, former Central Bank head Abdolnaser Hemmati, said he hoped some candidates would be reinstated.

The Supreme Leader did not explain why he modified his full endorsement of the Guardian Council’s actions.

In his statement on May 27, he rejected President Hassan Rouhani’s criticism of the bans, and he told Iranians not to boycott the election.

The Supreme Leader’s office is believed to backing the hardline favorite, judiciary head Ebrahim Raisi. By barring frontline candidates like Jahangiri and Larijani, the Guardian Council was seen as paving the way for the triumph of Raisi, who lost to Rouhani in 2017.

Iran’s English-language media are ignoring the Supreme Leader’s statement, instead headlining his declaration, “Revolution of Imam Khomeini is Stronger Than Ever“.

However, there is a significant split in Farsi-language sites. Khamenei’s comments on the bans is the top story in the conservative Tasnim. In contrast, Fars — the outlet of the Revolutionary Guards — is silent and prefers, “The Islamic Republic Will Continue With the Support of the People”.