Biden Sets Out “Basic Rules of the Road” to Putin 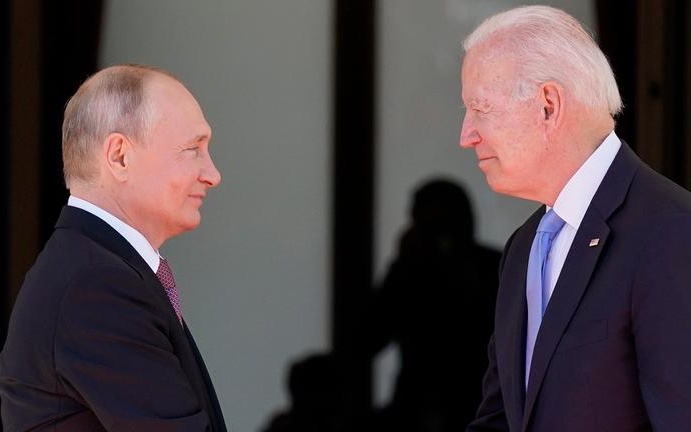 US President Joe Biden says that he set out the “basic rules of the road” to Russian leader Vladimir Putin in their meeting in Geneva.

Biden spoke to the media for about 45 minutes, following Putin’s own press conference, after three hours of discussions.. He set out a clear, firm line over the Kremlin’s past and present behavior on issues such as Ukraine, the attempted assassination and detention of opposition figure Alexei Navalny, and Moscow’s cyber-attacks on the US Government, companies, and infrastructure.

Explaining that the basis of the engagement was “mutual self-interest” for a “stable and predictable” relationship, he began, “Where we have differences, I wanted President Putin to understand why I say what I say and and why I do what I do — and how we’ll respond to certain kinds of actions that harm America interest.”

Biden referred to specific steps such as an agreement to return ambassadors to each other’s capitals, after the Kremlin recalled its representative followed Administration sanctions in mid-April over the Russian cyber-attacks. He said there were be work on arms control, and pointed to collaboration in others areas of mutual interest such as Afghanistan and the Iran nuclear talks.

But the US President set his general tone with a firm expression of the need to observe international law and rights at home and abroad.

I told him that, unlike other countries, including Russia, we’re uniquely a product of an idea….What’s that idea? We don’t derive our rights from the government; we possess them because we’re born — period. And we don’t yield them to a government.

And so, at the forum, I pointed out to him that that’s why we’re going raise our concerns about cases like Alexei Navalny. I made it clear to President Putin that we’ll continue to raise issues of fundamental human rights because that’s what we are, that’s who we are.

He continued by citing two US citizens detained in Russia, Paul Whelan and Trevor Reed, and the Kremlin’s pressure on media such as the US Government-funded Radio Free Europe and Radio Liberty.

The Biden turned to Russia’s interference in American elections.

The bottom line is, I told President Putin that we need to have some basic rules of the road that we can all abide by.

Biden set out a fundamental objective of “strategic stability” for areas of collaboration:

We’ll get our military experts and our diplomats together to work on a mechanism that can lead to control of new and dangerous and sophisticated weapons that are coming on the scene now that reduce the times of response, that raise the prospects of accidental war.

He linked his warning to Putin against further Russian cyber-attacks with the “proposition that certain critical infrastructure should be off limits to attack — period — by cyber or any other means”, giving the Russian leader of specific US sites “from the energy sector to our water systems”. Experts would confer in both countries.

Putin had insisted that any issue about Russia’s annexation of Crimea and efforts to split Ukraine had followed “terrorism” in the 2014 uprising that removed pro-Russian leader Viktor Yanukovych. Biden responded with “the United States’ unwavering commitment to the sovereignty and territorial integrity of Ukraine”.

The US President also highlighted “concerns” the repression of dissent in Belarus by Russia’s ally Alexander Lukashenko — “[Putin] didn’t disagree with what happened; he just has a different perspective of what to do about it” — and the need for a “modus operandi” in the Arctic.

On Syria, where Russia is trying to close the last border crossing for aid to millions of civilians, Biden said he raised “the urgent need to preserve and reopen the humanitarian corridors in Syria so that we can get food — just simple food and basic necessities to people who are starving to death”.

I did what I came to do: Number one, identify areas of practical work our two countries can do to advance our mutual interests and also benefit the world.

Two, communicate directly — directly — that the United States will respond to actions that impair our vital interests or those of our allies.

And three, to clearly lay out our country’s priorities and our values so he heard it straight from me.

Asked by several journalists about his response if the Kremlin continued cyber-attacks and election interference, Biden was blunt: “[Putin] knows I will take action….He knows there will be consequences.”

He said that, with the US and allies standing against the operations, Putin would know that “his credibility worldwide shrinks”: “It’s about their ability to influence other nations in a positive way.
Look, would you like to trade our economy for Russia’s economy?”

When a reporter asked about the specific US response, Biden said matter-of-factly, “I pointed out to him that we have significant cyber capability.”

Biden took the same general line over the possible death of Navalny in detention — “I made it clear to him that I believe the consequences of that would be devastating for Russia” — and Moscow’s defense of the Assad regime’s chemical weapons attacks in Syria.

In contrast to George W. Bush’s declaration that he “looked into the soul” of Putin, Biden pushed away an emphasis on a personal bond. He said he told Putin, “This is not a ‘kumbaya’ moment, as you used to say back in the ’60s in the United States, like, ‘Let’s hug and love each other.’”

Instead, he returned to mutual self-interest and set down a marker to measure developments: