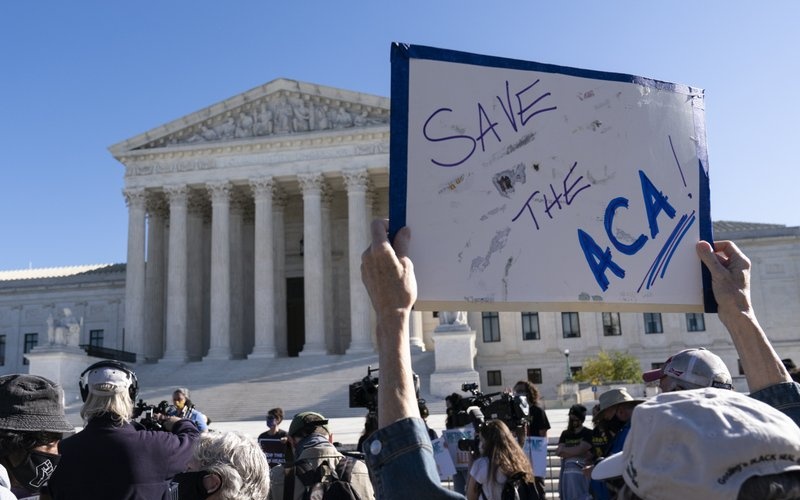 ObamaCare supporters outside the US Supreme Court in Washington, November 10, 2020 (Alex Brandon/AP)

For the third time, the US Supreme Court upholds ObamaCare.

The justices ruled 7-2 on Thursday in a case filed by state Attorneys General in 2018 which sought to end the Affordable Care Act entirely.

The Court found that the plaintiffs did not experience any harm giving them standing to challenge the Act.

The Trump Administration failed on several occasions to fulfil Donald Trump’s declaration that he would “bury” the system for national health care. The late Sen. John McCain gave a narrow thumbs down on the Senate floor in 2017 to prevent the burial.

Trump then used a series of executive order to weaken provisions of the Act, threatening the coverage in part for millions of Americans.

Support for ObamaCare is at its highest level, with enrollment of record numbers. Democrats in Congress have expanded benefits to counter Trump’s orders. Health insurance subsidies were widened recently, and January’s American Rescue Plan designated $34 billion, through the end of 2022, to make coverage more affordable for almost all Americans who purchase their own health plans. The Senate leadership is designing a package to expand Medicare for coverage of more middle-aged Americans and provision of dental, vision, and hearing benefits.

However, 12 states are continuing to hold out against any Medicare expansion.

Health and Human Services Secretary Xavier Becerra, the former California Attorney General, said after the Supreme Court decision, “It’s our chance now to really build now that three strikes and the opponents of health care are out. Now we know we survive, and now we build.”