UPDATED: US and Iran Push Back Reports of Prisoner Exchange 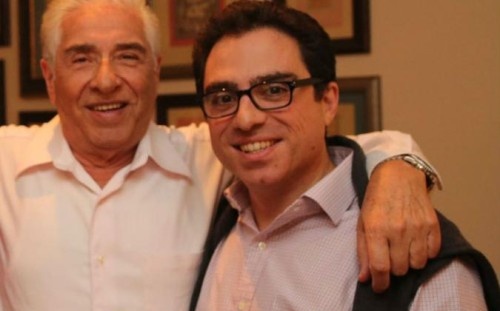 Baquer Namazi (L) and his son Siamak, sentenced in 2016 to 10 years in an Iranian prison

Two US-Iranian political prisoners, environmentalist Mohrad Tahbaz and oil executive Siamak Namazi, have been moved to a new location inside Tehran’s Evin Prison, raising hopes that they will be freed in a prisoner exchange.

Sources inside Evin said Tahbaz was moved on Saturday and Namazi on Sunday.

Past moves, to brief detainees and to try to extract commitments before release, have included US-Iranian historian Xiyue Wang — freed in a swap in December 2019 — and Lebanese-Iranian businessman Nizar Zakka.

ORIGINAL ENTRY, MAY 3: US and Iran officials have each pushed back reports in Tehran’s media of a prisoner exchange, with Iranians held in the US swapped for political detainees in Iran.

Iranian State TV claimed four American political prisoners would be exchanged for four Iranians in the US, detained over sanctions violations, and the release of $7 billion in frozen Iranian funds in South Korea.

In addition, Anglo-Iranian charity Nazanin Zaghari-Ratcliffe, held since April 2016, would be traded for £400 million ($552 million), held by the UK over a pre-Revolution deal for Chieftain tanks that were never delivered.

Zaghari-Ratcliffe completed a five-year sentence in March, but another 12 months was added earlier this month.

Biden Administration officials denied any agreement. State Department spokesman Ned Price said, “Reports that a prisoner swap deal has been reached are not true.” White House Chief of Staff Ron Klain told CBS News, “Unfortunately, that report is untrue. There is no agreement to release these four Americans.”

Iran’s Ambassador to the UN, Majid Ravanchi, echoed the rebuff.

NEW: Iran mission to the UN in New York tells me that these reports are not confirmed.

“Iran has always called for a comprehensive exchange of prisoners between the two countries,” says Iran’s UN Ambassador Ravanchi.

On Sunday morning, UK Foreign Secretary Dominic Raab confirmed — after years of London’s denial — that Zaghari-Ratcliffe’s case is linked to the £400 million: “We recognise the IMS debt should be repaid and we’re looking at arrangements for securing that.”

However, a British official said no deal had been made.

*Environmentalist Morad Tahbaz, detained with eight colleagues in January 2018 and sentenced in October 2019 to 10 years

*Businessman Emad Sharghi, sentenced in November 2020 to 10 years — 11 months after he was told that he had been cleared of charges