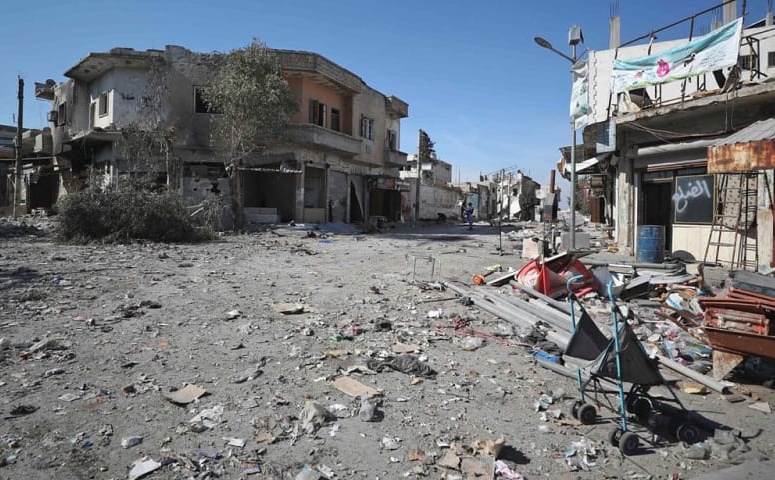 Russia has pushed back against Turkey with the recapture of a key town in Idlib Province in northwest Syria.

Saraqib is at the junction of the Damascus-to-Aleppo M5 and the cross-Idlib M4 highways. It was captured by the Russian-regime offensive at the start of February, defying a demand by Turkish President Recep Tayyip Erdoğan for Assad forces to withdraw from Idlib. Turkey then supported rebels in the recapture of the town last week.

Moscow and the Assad regime put substantial resources into yesterday’s attack, moving units from other parts of southern Idlib that were then recaptured by anti-Assad forces.

See also The Reality of Syria: No One “Wins”

Reports said the Russia-regime force now controls Saraqeb, with Russian “military police” in the town. But a local analyst explained to EA that the military policies are likely to be mercenaries from the Wagner Force, used by Moscow as ground troops throughout the 107-month Syrian conflict.

There’s no doubt that rebels will attack Russian occupation forces disguised as military police, but Turkey probably won’t attack them.

Fortunately the Russians don’t have much regular troops on that front line, but they might provide the Wagner mercs with vehicles and uniforms.

The Turkish military said another of its soldiers was killed near Saraqib, the 56th to be slain in the past two months by pro-Assad attacks.

Putin and Erdoğan Face Off

A Russian occupation of the town strengthens Vladimir Putin’s negotiating hand as he meets Erdoğan in Moscow on Thursday or Friday. The two men are jockeying for position amid the 10-month Russian-regime offensive which has killed about 2,000 civilians, wounded thousands, and displaced more than one million.

With Turkey hosting more than 3.6 Syrian refugees but closing its border in 2016, Erdoğan stepped up his pressure on the international community for support against the Russian-regime offensive.

The Europeans think that Turkey will continue to take care of the refugees for another nine years. Such a thing will not happen.

Turkey has fulfilled all its responsibilities when it comes to Syrian refugees. But the EU has failed to abide by [our] declaration and continues to implement double standards. We have already spent $40 billion for refugees so far. We demand the EU take a fair share of the burden.

Since last Friday, Turkey has carried out hundreds of attacks on pro-Assad targets, responding to a strike which killed 36 Turkish soldiers, and destroyed scores of tanks, other armored vehicles, warplanes, air defense systems, multiple rocket launchers, and heavy weapons.

At the same time, Ankara is encouraging Syrian refugees to exit the country, but Greek border police are blocking the effort. On Monday, a refugee was killed amid firing of tear gas and stun grenades by the Greeks.

Putin avoided reference to the Idlib situation as he focused on Donald Trump and the US defense budget, but he may have implicitly addressed Erdoğan with the assertion, “We are not going to fight against anyone. We are going to create conditions so that nobody wants to fight against us.”

German Chancellor Angela Merkel called for a ceasefire: “We also need to create a safe zone for hundreds of thousands of Syrians standing on the Turkish border right now.”