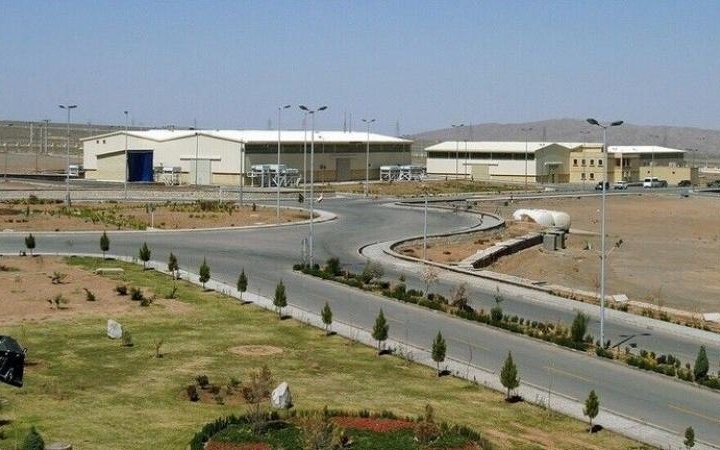 The Natanz nuclear research and development complex in central Iran

A “senior Biden Administration official” has said in a statement, “We have seen reports of an incident at the Natanz enrichment facility in Iran. The United States had no involvement, and we have nothing to add to speculation about the causes.”

An extract from my comments to Australia’s ABC News about Tehran’s reaction to the attack on the Natanz nuclear facility, “Iranian officials are rattled”:

Marandi said that, with IAEA inspections of Iran’s facilities, it was no surprise that intelligence was shared with foreign services leading to attacks.

This morning Marandi, whose views echo those of hardliners including the Supreme Leader’s office, turned against the Rouhani Government.

The worst and most incompetent administration in post-Revolutionary Iran will soon leave office.

Western intelligence agencies and the apartheid regime have made a grave mistake. pic.twitter.com/VGNL9DXWSs

The head of the Atomic Energy Organization of Iran, Ali Akbar Salehi, has proclaimed that the damage of the attack on the Natanz nuclear facility is not serious: “Enrichment in Natanz has not stopped & is moving forward vigorously.”

They’ve said Iran’s nuclear activities in Natanz have been delayed by nine months. But I emphasize that a significant part of the enemy’s sabotage will be compensated and this caravan won’t stop.

Salehi continued, “We replace broken centrifuges with new optimized types,” and that Iran is “building several halls in the heart of the mountain” where the Natanz plant is located.

AEOI spokesman Behrouz Kamalvandi said from his hospital bed, after he was seriously injured in a fall at the plant: The explosion was not strong enough to destroy everything.”

He claimed a false ceiling had collapsed in one of the control rooms and “they can fix the damaged parts soon”.

Kamalvandi suffered fractures to his head and ankle when he fell from a height of 7 meters (23 feet) during an inspection of the facility after the explosion.

Iranian Foreign Minister Mohammad Javad Zarif, speaking to Parliament, has blamed Israel for the explosion and blackout at the Natanz nuclear facility: “Zionists want to take revenge for the success in the path of lifting the oppressive sanctions, but we will not allow it and we will take revenge for these actions from Zionists themselves.”

Foreign Ministry spokesman Saeed Khatibzadeh also vowed, “Iran’s response will be taking revenge on the Zionist regime in due time and place.”

ORIGINAL ENTRY: Israel’s top officials indicate they are responsible for a crippling attack on one of Iran’s two primary nuclear research and development complexes.

Iranian officials did not give a cause, and Israel publicly did not take responsibility. However, “American and Israeli intelligence officials” said Israel carried out the attack which caused “severe damage at the heart of Iran’s enrichment program”.
.
Two intelligence officials said a large, deliberate explosion completely destroyed the independent internal power system for underground uranium centrifuges. The officials estimated that it may be at least nine months before Natanz can resume production.

Israeli Prime Minister Benjamin Netanyahu said on Sunday night at a ceremony for security forces, “The fight against Iran and its proxies and the Iranian armament is a giant mission. The situation that exists today doesn’t say anything about the situation that will exist tomorrow.”

The head of the Israel Defense Forces, Gen. Aviv Kohavi, said in a speech that “operations in the Middle East are not hidden from the eyes of the enemy…They are watching us, seeing [our] abilities and weighing their steps with caution.”

A Response to Iran’s Centrifuges

The blackout came hours after Iran proclaimed the launch of more advanced centrifuges, breaking a key provision of the 2015 nuclear deal with the remaining 5+1 Powers (US, UK, France, Germany, China, and Russia. President Hassan Rouhani celebrated at a ceremony on National Nuclear Technology Day while emphasizing, “All our nuclear activities are peaceful and for non-military purposes.”

Indirect talks between Iran, the US, and the other powers opened in Vienna last week, seeking American re-entry into the agreement from which the Trump Administration in May 2018. However, they made little advance with Tehran publicly demanding the removal of all US sanctions before further discussions.

On Sunday, US Defense Secretary Lloyd Austin was in Israel for discussions with Prime Minister Benjamin Netanyahu and Defense Minister Benny Gantz.

For more than a decade, the US and Israel have tried to limit Iran’s nuclear program with cyber-attacks. Israel has also assassinated nuclear scientists.

Last July 2020, a building at Natanz, one of Iran’s two major nuclear and research development facilities, was damaged in an explosion. The incident, targeting the uranium centrifuges, is believed to be an Israeli operation using a local contact at the plant.

Iran’s nuclear head Salehi tried to turn the damaging attack into a “failure” for the US, Israel, and others.

He maintained, “To thwart the goals of this terrorist movement, the Islamic Republic of Iran will continue to seriously improve nuclear technology on the one hand and to lift oppressive sanctions on the other hand.”