Little Progress Between US and Iran in Indirect Nuclear Talks 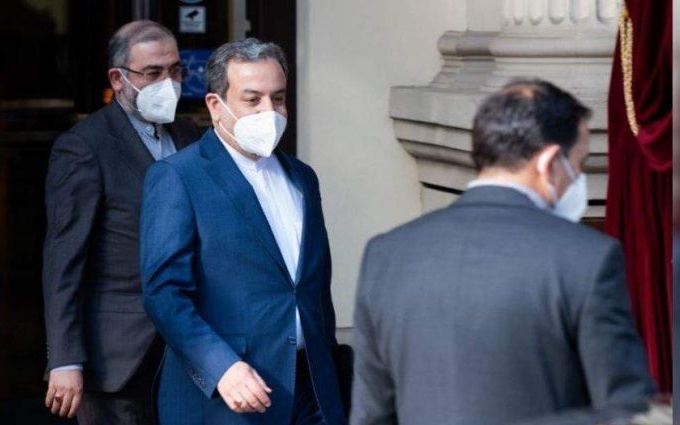 The first week of indirect talks over the 2015 Iran nuclear deal has concluded with little progress.

The European Union is overseeing the discussions in Vienna, with the remaining powers in the agreement (UK, France, Germany, China, and Russia) moving between the Iranians and Americans.

But after three days of technical discussions, the US is still promoting a “sequenced” approach, with lifting of American sanctions linked to Iran’s return to compliance with the agreement. Tehran is insisting on removal of all sanctions before it pulls back from enrichment of uranium, installation and operation of advanced centrifuges, and limits on inspections by the International Atomic Energy Agency.

-All Trump sanctions were anti-JCPOA & must be removed—w/o distinction between arbitrary designations.

Deputy Foreign Minister Abbas Araqchi, leading the Iranian delegation in Vienna, said, “The path of return to the JCPOA [Joint Comprehensive Plan of Action] will open if all JCPOA-related and Trump-era sanctions are lifted.”

A spokesman for Iran’s Atomic Energy Organization covered up the technical discussions which took place, declaring that the working group is not active “for now” although but the sanctions working group has met. He said the technical group would only convene after the fate of sanctions is determined.

“Heading Towards An Impasse”

The Biden Administration has said that it is ready to lift “sanctions that are inconsistent with the JCPOA”, without detailing the specific measures.

But a “senior State Department official” told reporters on Friday that, while the Administration had seen some signs of Iranian seriousness about compliance with the deal, it was “certainly not enough”.

The official said in a conference call, “We’ve told them in broader terms the kind of sanctions we’d be prepared to lift and those that would stay on.” But he cautioned, “If Iran sticks to the position that every sanction that has been imposed since 2017 has to be lifted or there will be no deal, then we are heading towards an impasse.”

European officials said Iran is setting out a tough line at the outset of the talks.

The EU said in its statement that it “noted with satisfaction the initial progress made”, and that the Joint Commission will reconvene next week. Iran’s Foreign Ministry said the resumption will be on Wednesday.

China’s Ambassador to the IAEA, Wang Qun, adopted an optimistic tone, “All parties have narrowed down their differences and we do see the momentum for gradually evolving consensus.”

But a “senior European diplomatic source” said, “Given the technical complexity of the nuclear aspects and legal intricacies of sanctions lifting, it would be very optimistic to think a few weeks.”

Supreme Leader: We Must Be Able to Sell Oil

Iran’s Supreme Leader maintained a tough pose on Friday. He said that there must be “verification” of the removal of US sanctions so Iran can sell oil “in an official manner, with ease and under normal conditions, and its money be received by Iran”.

Ayatollah Khamenei’s Instagram account feature a video in which he maintained that Iran is in no hurry for a US return to the agreement, from which the Trump Administration withdrew in May 2018.

In Washington, State Department spokesman Ned Price said the discussions in Vienna were “constructive…business-like; it has been a step forward.”

But he cautioned against allowing “expectations to outpace where we are”.

The senior US official spoke of urgency to advance the talks: “Once their presidential campaign begins [in Iran in June], it could be many months in which it would be very difficult to have any progress.”

He called for direct negotiations, “We could go at a good pace. It could go faster if we sit down with them, and have significantly more effective discussions.”