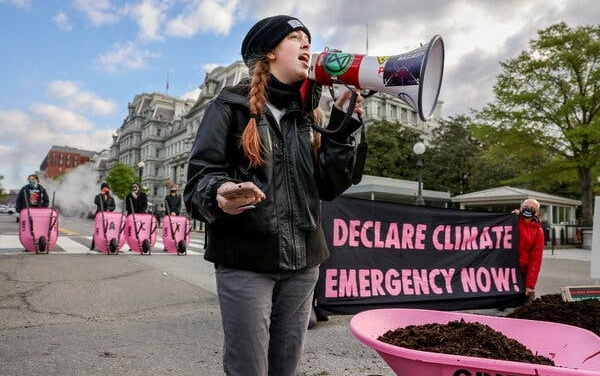 An activist outside the White House, April 22, 2021 (Evelyn Hockstein/Reuters)

Addressing 40 world leaders at the start of a two-day summit, President Joe Biden has committed to a halving of US global warming emissions by 2030.

In the meeting on Thursday, marking the American return to the Paris Agreement on climate change, Biden said, “This is a moral imperative, an economic imperative. A moment of peril, but also a moment of extraordinary possibilities.”

Biden also promised to double the US assistance to developing countries address climate change, with about $5.7 billion by 2024.

The measures require Congressional approval. Biden has passed executive orders for new fuel economy standards for vehicles, limits on fossil fuel extraction on public lands, and financial regulations designed to curb investment in heavy-polluting industries. But these are far from sufficient to meet the 50% target.

Japan, Canada, the UK, and the European Union also committed on Thursday to acceleration in reductions. Japanese Prime Minister Yoshihide Suga raised Tokyo’s target for cuts from 26% to 46% by 2030, and said Japan will seek 50%. Canadian Prime Minister Justin Trudeau lifted Canada’s objection from 30% to 45%. South Korean President Moon Jae-in announced an end to public finance for coal-fired power plants overseas. Even Brazilian President Jair Bolsonaro, a climate-change denier, vowed to end illegal deforestation by 2030 after overseeing the most extensive destruction of the Amazon rain forest in 12 years.

However, China, India, and Russia — the world’s first, third, and fourth largest emitters of carbon dioxide — made no new commitments.

Chinese President Xi Jinping did pledge that Beijing will “strictly limit increasing coal consumption” in the next five years and pursue phased reduction in the following five years. He repeated last year’s promise for elimination of net carbon emissions by 2060.

The administration of Donald Trump, a climate change denier, withdrew the US from the Paris Agreement in June 2017. It stripped environmental regulations, put a former coal lobbyist at the head of the Environmental Protection Agency, and forbade US agencies from posting scientific studies or even mentioning climate change on web pages.

Analysts said that Biden’s contrasting approach, to meet its target, will need the near-elimination of coal for electricity and millions of electric vehicles supplanting gasoline vehicles.

The Biden pledge puts the US on par with Europe, but still behind the UK.

But critics noted the lack of Chinese commitment on Thursday. Senate Republican leader Mitch McConnell said Beijing has “shamelessly” kept emitting more and noted, “Their share of greenhouse gas emissions are now nearly double that of the United States.”

Analysts project that if global temperatures rise more than 1.5 degrees Celsius (2.7 degrees Fahrenheit) above those in the pre-industrial era, the world economy will lose $23 trillion in 2050 from natural disasters and the spread of disease.

Kerry maintained Thursday that the US could meet the challenge, despite the prospect of opposition from Republican legislators

Ursula von der Leyen, head of the European Commission, noted the significant change with a new Administration in Washington, “The Paris Agreement is humanity’s life insurance. It is so good to have the US back on our side.”