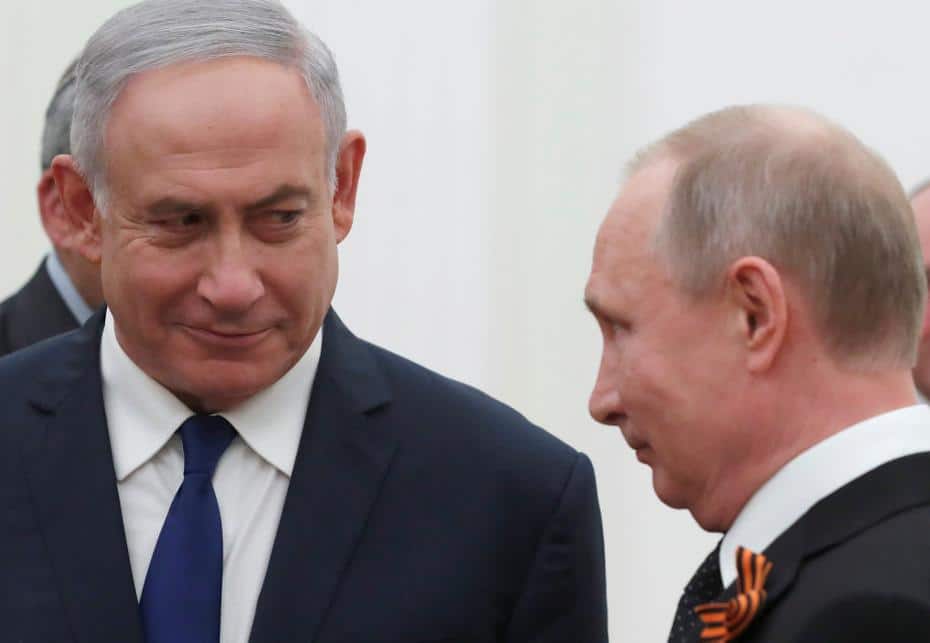 President Vladimir Putin has backed away from Russia’s criticism of Israel over the Assad regime’s downing of a Russian surveillance plane, killing 14 personnel — but has told Israeli Prime Minister Benjamin Netanyahu to ensure it does not happen again.

The Russian Il-20 plane crashed in the Mediterranean about 27 km (17 miles) west of the Syrian coastal city of Baniyas, soon after Israeli F-16 fighters fired missiles on Assad regime targets in Latakia and Tartous Provinces.

The Russian Defense Ministry initially put out a series of false claims over the incident. It tied the downing not only to the Israeli attacks but also — wrongly — firing from a French warship, while the Assad regime asserted — wrongly — that US and UK warplanes had also struck targets which included a complex linked to the regime’s production of missiles and chemical weapons.

Finally, Moscow settled on the line that Israel was to blame because its F-16s supposedly used the Il-20 for cover, putting the Russian plane at risk.

But the Israel Defense Forces explained that their attacking jets had already left the area and had returned to Israeli airspace when the Assad regime’s military fired Russian-made SS-20 missiles, one of which hit the Il-20.

In a more substantial challenge, Russia said Israel had erred by only giving a minute’s notice of its attacks, breaking a “de-confliction arrangement” established between the two countries in September 2015 — just before Moscow’s military intervention propping up the Assad regime.

“Don’t Allow This in Future”

But Putin did not press the criticism in his conversation with Netanyahu, calling the incident a “chain of tragic accidental circumstances”. He retracted the warning in the Defense Ministry’s statement, which he had approved, warning of reprisals.

Instead, the Russian leader urged his Israeli counterpart “not to allow such situations in the future”.

Meanwhile, Netanyahu focused on the wider relationship between the two countries and the need to maintain it in the Syrian conflict, citing “the importance of the continued security coordination between Israel and Syria that has managed to prevent many casualties on both sides in the last three years”.

He also took the opportunity to press his demand for the withdrawal from Syria of all Iranian and Iranian-led forces.

Iran, alongside Russia, has been the essential ally of the Assad regime, organizing a 50,000-strong regime militia accompanied by thousands of Iranian-led fighters from Afghanistan, Pakistan, and Iraq as well as specialist Iranian units.

Israel has stepped up its missile strikes in the past year to support the pressure for Iranian withdrawal.

The Iranian regime took a harder line than Putin over the incident, refusing to mute criticism of Israel.

Before the news of the Putin-Netanyahu conversation, Tehran University academic Seyed Mohammad Marandi, a leading English-language spokesman for the regime, condemned the Israelis in an interview with Russia’s RT:

Russia has admitted the first group of Syrian children for military education.

In mid-July, the Kremlin decreed that Syrian children can study for free if they have sufficient knowledge of Russian and pass preliminary exams.

A new military agreement between #Syria and #Russia allows Syrian children to gain free military training in Russia. The first group of Syrian children have arrived at St. Petersburg last month, and are expected to start training in September pic.twitter.com/x7Xe4CIGC2

Kalo was seized with his two children and wife at a military intelligence checkpoint between Manbij and Aleppo on August 25, as he travelled from his hometown Kobane to renew his passport.

The journalist’s family were released and military intelligence said he would be freed after he was asked some questions; however, Kalo is still held in Aleppo. His relatives say he will be transferred to the Military Security’s Palestine Branch in Damascus.

Kalo graduated from the the journalism school at the University of Damascus and worked in Kobane before joining Rudaw.