Iran’s Supreme Leader: Indirect Nuclear Talks to Continue with US 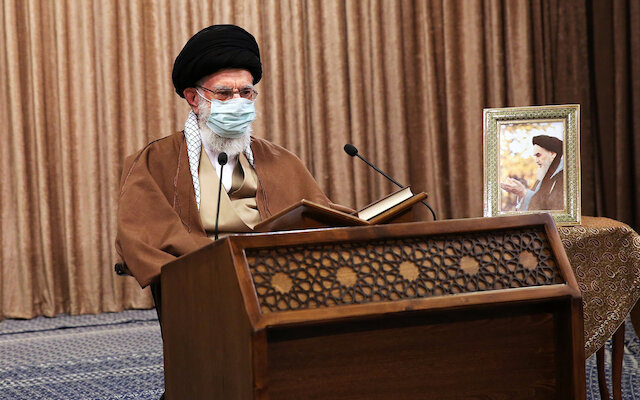 Iran’s Supreme Leader has said that indirect nuclear talks will continue with the US.

Ayatollah Khamenei’s statement in Tehran on Wednesday came before today’s resumption of the discussions in Vienna, brokered by the European Union and the remaining countries in the 2015 deal: UK, France, Germany, China, and Russia.

There was speculation that Iran would pull out after Sunday’s attack, probably by Israel, on the Natanz nuclear facility and its uranium centrifuges.

But Tehran responded by sending its delegation back to Vienna, while declaring that it will quickly replace and upgrade thousands of damaged centrifuges. On Tuesday, the delegation’s leader, Deputy Foreign Minister Abbas Araqchi, proclaimed that Iran will soon pursue 60% enriched uranium — shattering the limits in the 2015 deal of 3.67% and beyond Tehran’s renewal of 20% enrichment in January, if still short of military grade 90%.

See also Iran: We Will Enrich Uranium to 60%
After Attack on Nuclear Complex, Iran Toughens Line on Sanctions and Talks

Now, they have decided to negotiate in order to implement this same policy. I have no problem with this, but they should be careful not to let negotiations become too draining or allow the other side to lengthen the negotiations too much, because this is detrimental to the country.

He restated Iran’s precondition that US sanctions since the July 2015 deal must be removed before talks can advance: “First the sanctions must be removed, then Iran will carry out its commitments in the JCPOA [Joint Comprehensive Plan of Action].”

The Biden Administration is proposing a “sequenced” approach, with lifting of sanctions linked to Iran’s return to compliance with the agreement.

Khamenei spent much of his statement deriding the Americans:

When the Americans continuously speak of their willingness to negotiate directly with Iran, they do not intend to negotiate in order to accept the truth. Rather, their purpose in negotiating is to impose their false claims. This is what they always do.

The European powers in the agreement — the UK, France, and Germany — have supported the sequenced approach. The UK and France have also backed renegotiation of the deal to cover Iran’s ballistic missile program and to extend terminal dates of provisions.

But the Supreme Leader asserted, “In some of the Europeans’ private meetings with our officials…they acknowledge that Iran is right about its policy that the sanctions should be removed first.”

He complained, “When it comes to decision-making, they follow [the US]. They are not truly independent in any way.”