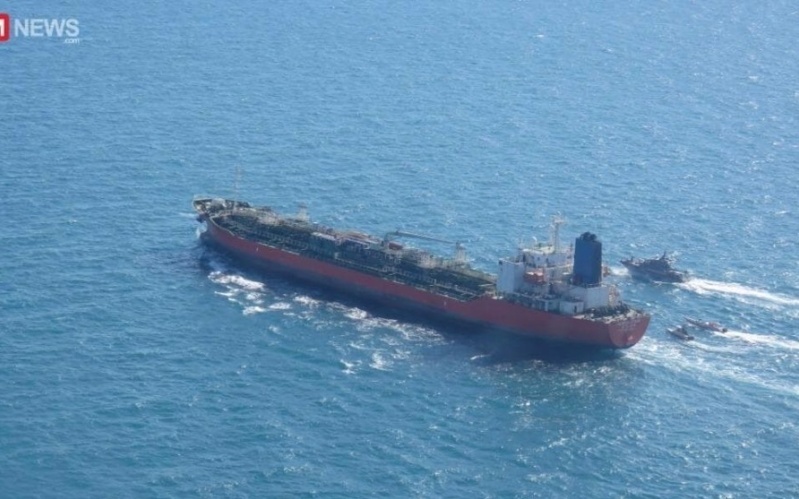 Amid the start of indirect talks with the US on the 2015 nuclear deal, Iran has released the South Korean oil tanker Hankuk Chemi.

The South Korean Foreign Ministry said on Friday that the Hankuk Chemi, seized by Revolutionary Guards on January 4, and its captain had been freed. The tanker has left the port Bandar Abbas in southern Iran.

Tehran is demanding the release of $7 billion in frozen assets from South Korea.

The US has reportedly offered the partial unfreezing of the assets as part of a “sequenced” approach in the nuclear talks. Iran has publicly rejected any step-by-step resolution, setting the precondition of the full lifting of American sanctions.

South Korea has been a leading customer of Iranian oil, but halted purchases in 2019 after comprehensive sanctions imposed by the Trump Administration.

Iranian Foreign Minister Mohammad Javad Zarif has distanced the Government from Iran’s seizure of a South Korean tanker, telling Vice Foreign Minister Choi Jong-kun that it is a “technical” issue to be handled by the Islamic Republic’s courts.

At the same time, Zarif maintained Tehran’s demand for the unblocking of $7 billion of Iranian assets in South Korean banks: “The illegal act of South Korean banks has significantly deteriorated Iranian people’s view of the country and has done serious damage to its reputation.”

Central Bank head Abdolnasser Hemmati echoed, “This behaviour by South Korea is a major error and fundamentally it is unacceptable for South Korea to block Iran’s money by following orders from a third country [the US].”

South Korean companies have lost good opportunities in Iran in recent years. Sanctions have made Iran focus on its local capabilities in a way that we are now self-sufficient in fulfilling many of our needs in home appliances.

Even if relations between the two countries are normalized in the future, South Korean companies would have to think about investments, transfer of technical knowledge, and participation in manufacturing rather than selling their goods.

Iranian officials have told Seoul to avoid politicizing the seizure of the South Korean Hankuk Chemi by the Revolutionary Guards in the Strait of Hormuz.

At the same time, Tehran demanded the unfreezing of $7 billion in Iranian assets held in South Korea’s financial system.

Vice Foreign Minister Choi Jong-kun arrived in Tehran on Sunday to discuss the status of the Hankuk Chemi.

But Iran maintained pressure by accusing Seoul of holding its funds “hostage”, while denying that the seizure of the Hankuk Chemi and its 20 crew were hostage taking.

The Revolutionary Guards declared that the Hankuk Choi was breaking maritime environmental law, but Araqchi pointed to another motive: “For about 2 1/2 years, South Korean banks have frozen Iran’s funds….It is not acceptable….In our view, this is more because of Seoul’s lack of political will [rather] than the US sanctions.”

Iranian officials have told South Korea to behave “rationally and responsibly” over the Revolutionary Guards’ seizure of the South Korean-flagged tanker Hankuk Chemi.

The problem with the Korean ship is purely technical, and the Islamic Republic of Iran, like all countries, is fully sensitive to protecting and safeguarding the marine environment and deals with violations in accordance with the law.

The South Korean Government’s behavior in this regard is incomprehensible and rejected. We urge the Korean government to deal rationally and responsibly with this technical issue.

Seoul has rejected Tehran’s claim that the tanker, with 20 crew and 7,200 tons of ethanol, was seized for causing water pollution. The Hankuk Chemi’s owner said on Tuesday that Revolutionary Guard troops had stormed the vessel and forced it to change course and travel to the southern Iranian port of Bandar Abbas.

South Korean forces have arrived in waters near the Strait of Hormuz. Among them is the Choi Young, a destroyer with members of the Cheonghae anti-piracy unit.

“[The destroyer] is carrying out missions to ensure the safety of our nationals,” Foreign Ministry spokesperson Boo Seung-chan said on Tuesday

In a report submitted to the National Assembly, the Foreign Ministry said it is preparing to take legal action.

On Tuesday, Seoul said it will dispatch a delegation to Tehran to find a resolution “through bilateral negotiations”.

ORIGINAL ENTRY, JAN. 4: Iran’s Revolutionary Guards have seized a South Korean-flagged tanker in the Strait of Hormuz near the Persian Gulf.

The Guards’ Navy said in a statement that the Hankuk Chemi, carrying 7,200 tons of ethanol, was intercepted for “repetitive violations of maritime environmental law”. It claimed the tanker had polluted the Gulf with chemicals.

The Hankuk Chemi, which set off from al-Jubail in Saudi Arabia for Fujairah in the United Arab Emirates, was taken to the port city of Bandar Abbas in southern Iran.

The Strait of Hormuz is a route for 20% of the world’s oil supply.

The seizure comes a day after the first anniversary of the US assassination of Maj. Gen. Qassem Soleimani, the commander of the Guards’ Quds Force.

Iranian leaders have pledged retaliation against the US over the drone strike. On Sunday, the Pentagon cancelled the withdrawal of the aircraft carrier USS Nimitz from the area “due to the recent threats issued by Iranian leaders against President Trump and other US government officials”.

Tehran is also trying to get South Korea to release almost $7 billion of oil revenues, amid comprehensive US sanctions imposed in November 2018.

The Revolutionary Guards have periodically seized vessels in the Persian Gulf, claiming violations of maritime laws. In July 2019, they detained the UK-flagged, Swedish-owned Stena Impero, in retaliation for the impoundment of the Iranian tanker Grace off the coast of Gibraltar.