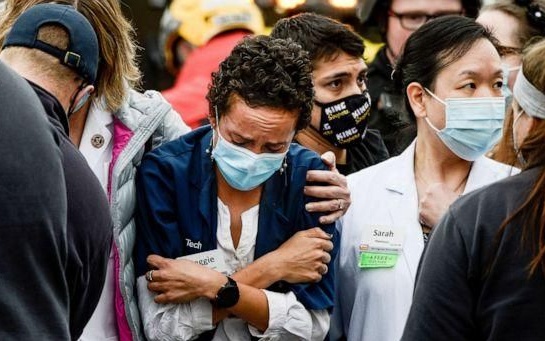 A woman is consoled after 10 people were killed in a Boulder, Colorado supermarket, March 22, 2021 (Michael Ciaglo/USA Today)

The measures include limits on ghost guns, or firearms assembled from kits. Pistols converted into short-barrel rifles, through a stabilizing brace, will be subject to National Firearms Act with fingerprinting, a background check, and a regular renewal of a license. The Justice Department will publish model “red flag” legislation for states, enabling police officers and family members to petition a court to remove firearms temporarily from people who may present a danger to themselves or others.

But Biden acknowledged on Thursday that more extensive measures rest on Congressional legislation. With the Senate split 50-50, Republicans are holding up consideration of a ban on assault weapons and expansion of background checks, both adopted by the Democratic-majority House.

Republican-led states are also expanding rather than checking the proliferation of guns. On Thursday, Tennessee Gov. Bill Lee signed legislation allowing most adults in the state to carry a handgun, either concealed or openly, without a permit, background check, or training.

The announcement followed mass killings in Atlanta, Georgia and Boulder, Colorado. On Thursday, a gunman opened fire on his fellow workers at a Texas cabinet-making company, killing one person and wounding six, including a state trooper. A former National Football League player killed a prominent doctor, his wife, and their two grandchildren and then himself in South Carolina.

“This is an epidemic, and it has to stop,” Biden said.

Because “ghost guns” have no serial numbers, they cannot be traced and do not require background checks, appealing to criminal organizations and right-wing extremists. About 10,000 ghost guns were recovered by law enforcement in 2019, and numbers roses in cities like Philadelphia, Baltimore, and San Diego last year.

The Administration cannot mandate “red flag” measures by states, so is hoping the model guidance will encourage more action. Currently, 19 states and Washington, D.C., have red flag laws, and Alaska and Wisconsin are considering measures.

Biden also nominated David Chipman to lead the Bureau of Alcohol, Tobacco, Firearms and Explosives, which has not had a permanent director since 2015.

Chipman, who was an ATF agent, is an adviser to the gun control organization founded by former US Rep. Gabrielle Giffords, who was wounded in the head in a mass shooting in 2011 in Tucson, Arizona.

Since 2006, when lawmakers allied with the National Rifle Association made the position of ATF Director subject to Senate confirmation, only one head has been approved.

They have offered plenty of thoughts and prayers, members of Congress, but they have passed not a single federal law to reduce gun violence. Enough prayers. Time for action.