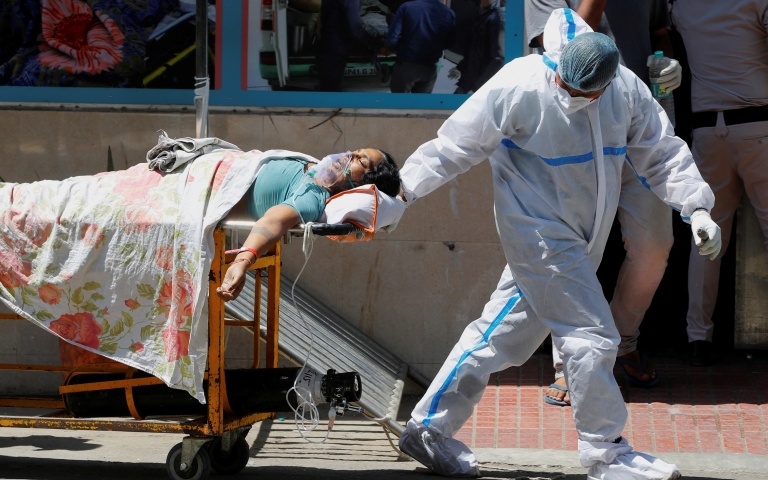 The White House’s top Coronavirus expert, Dr. Anthony Fauci, has criticized the failure to coordinate action over the pandemic, including the provision and distribution of vaccines. He told The Guardian Australia:

And that’s something that, unfortunately, has not been accomplished. Often when you have diseases in which there is a limited amount of intervention, be it therapeutic or prevention, this is something that all the countries that are relatively rich countries or countries that have a higher income have to pay more attention to.

Fauci spoke as the death toll in India, in the grip of a record-setting surge, passed 200,000 and the country announced a new global high of 360,960 daily cases.

The World Health Organization reported Tuesday said there were almost 5.7 million weekly cases, the ninth consecutive increase. The majority are in India, with a 52% increase to 2,172,063 new cases in seven days.

Fauci said the US is “sending oxygen, remdesivir, personal protective equipment, a variety of other medications and soon we’ll be sending vaccine”. But he explained that far more must be done:

I think that that’s a responsibility that the rich countries need to assume. Right now it’s a terrible tragic situation where people are dying because there’s not enough oxygen, where there’s not enough hospital beds. We have to try, looking forward, to get as much equity when it comes to public health issues as we possibly can.

ORIGINAL ENTRY: President Joe Biden plans to send up to 60 million doses of Coronavirus vaccine abroad, as the pandemic surges in areas such as India.

Administration officials said the AstraZeneca vaccine doses will be shipped as soon as regulators deem the doses safe.

The AstraZeneca vaccine, developed at Oxford University in the UK, is used widely across the world but has not been approved for inoculations in the US.

While more than 1 billion doses have been administered across 174 countries, people in nations with the highest incomes are getting vaccinated about 25 times faster than those with the lowest. The richest 27 countries have 37.4% of global vaccinations, compared to 10.5% of population. The US alone, with more than half of adults inoculated, has 22.7% of vaccinations for 4.3% of the world’s people.

India has given 145 million doses, covering 5.3% of its population. Across Africa, Morocco is the only country to cover more than 1.6% of people.

On Monday, Biden spoke with Prime Minister Narendra Modi of India. The White House reported that the two leaders pledged to “work closely together in the fight against Covid-19″.

Public health experts said the US commitment is still too small. The AstraZeneca doses are being made at a plant in Baltimore, Maryland where production was suspended after possible contamination. The Food and Drug Administration will have to certify that the doses meet US standards for safety and quality.

Entering office on January 20, Biden immediately ordered US re-entry into the World Health Organization. He pledged $4 billion to international vaccine production and distribution and financial support to an Indian vaccine manufacturer to produce at least one billion doses by the end of 2022.

However, up to now the only US vaccines sent abroad have been a limited amount to Canada and Mexico last month.

Globally, there have been almost 150 million confirmed Coronavirus cases and more than 3.12 million deaths. In the past months, there have been large surges in countries such as Brazil, Turkey, and Iran.