Assad Regime to Hold Presidential “Election” on May 26 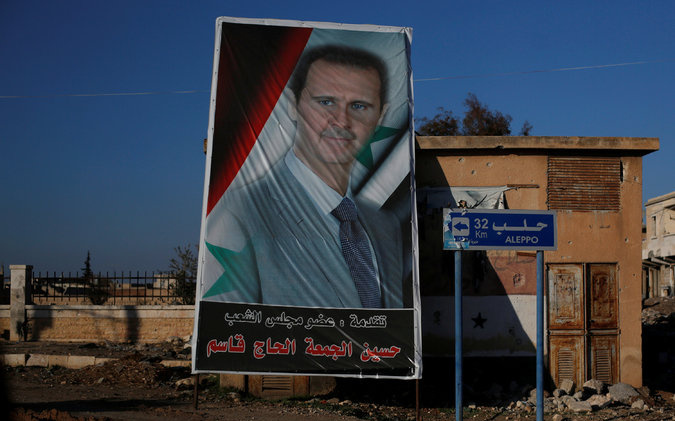 A torn poster of Bashar al-Assad in Aleppo city, 2016

The Assad regime will stage a Presidential “election” on May 26.

The Speaker of the People’s Assembly, Hammoudah Sabbagh, announced on Sunday that the process will begin on April 19 with submissions of candidacy.

Some Syrians who live abroad will vote on May 20. However, many of Syria’s 5.6 million refugees and more than 6 million displaced internally — about half of the country’s population — will not be able to cast a ballot.

Bashar al-Assad and his late father Hafez have ruled Syria since 1970. Dissent has been repressed, particularly with the deadly crackdown on the Syrian rising — killing hundreds of thousands of civilians through bombing, ground assaults, and execution, torture, and poor prison conditions — since March 2011.

The regime held its first, token Presidential election in 2014. Two nominal candidates allowed to run alongside Assad, who was officially credited with 88.7% of the vote. There was no voting in areas controlled by the opposition or Kurdish groups, as well as the exclusion of refugees and the displaced.

Candidates must have lived in Syria for the last 10 years. The clause prevents leading opposition figures, who have had to flee the country to avoid death or detention, from standing.

Opposition activist Mustafa Sejari said on Sunday, “We consider Assad’s parliament to have no legitimacy. This is a theatrical farce and a desperate effort to reinvent this criminal regime.”

An effort since January 2018 for a new Syrian Constitution, brokered by the UN, has not advanced amid the regime’s insistence that “terrorists” — its umbrella term for anti-Assad factinos — and sovereignty must be addressed first.