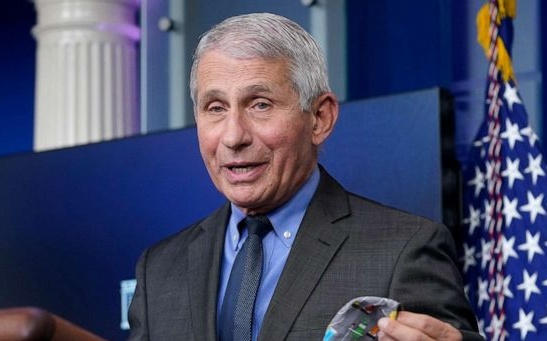 Dr. Anthony Fauci, the White House’s top Coronavirus expert, speaks out about the damage of Republicans denying the Coronavirus vaccine and containment measures.

Fauci said on Sunday that GOP politicians, under cover of talking about “civil liberties”, are “working against” efforts to deal with the pandemic, save lives, and lift restrictions.

The doctor spoke as the US passed the first-dose vaccination of 50% of all adults. Almost 130 million people above age 18 have received an initial dose. Almost 84 million adults, about 32.5% of the population, are fully vaccinated.

Fauci told Sunday morning political programs of his frustration with surveys that up to 45% of GOP supporters will not take the vaccine:

The fact that one may not want to get vaccinated, in this case a disturbingly large proportion of Republicans, only actually works against where they want to be.

They want to be able to say these restrictions that are put on by public health recommendations are things that they’re very concerned about. But the way you get rid of those restrictions is to get as many people vaccinated as quickly and as efficiently as possible….

On the one hand they want to be relieved of the restrictions. On the other hand, they don’t want to get vaccinated, it just almost doesn’t make any sense. This is a public health issue, it’s not a civil liberties issue.

On Thursday, Fauci dealt in a House hearing with Trumpist Rep. Jim Jordan, who questioned measures such as wearing of masks and barracked the doctor about when Americans “get their liberty and freedoms back”.

The expert replied calmly, “My message, Congressman Jordan is to get as many people as vaccinated as we possibly can, to get the level of infection in this country low so it is no longer a threat.”

He summarized in response to Jordan’s heckling, “We’re not talking about liberties. We’re talking about a pandemic that has killed 560,000 Americans.”

Despite the spread of vaccinations, there has been an 8% rise in new cases in the last two weeks as some states rescind containment measures.

Michigan Gov. Gretchen Whitmer spoke on Sunday about the “very serious moment” in the state, with record hospitalizations and more than 2,200 cases — over 10% of the US total — of the B-117 variant.

She said she was handcuffed by the GOP in implementing further steps for containment:

In the waning months I have been sued by my legislature, I have lost in a Republican controlled Supreme Court, and I don’t have all of the exact same tools.

Despite those things, we still have some of the strongest mitigation measures in the country, masked mandates, capacity limitations, working from home. We’re moving fast to get shots in arms, a million in two weeks, a million in just the last nine days. [But] I’m working with a smaller set of tools at my disposal.