Opposition Calls for Pressure on Assad Over Syria Constitution Talks 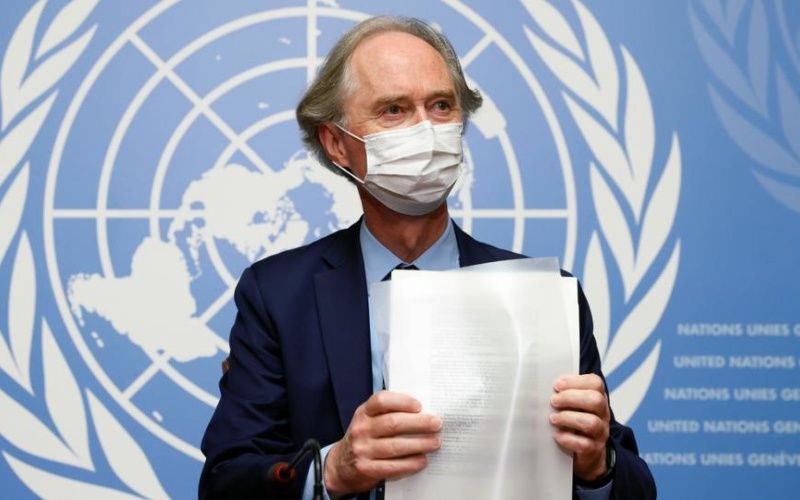 Syria’s opposition has called on UN envoy Geir Pederson to press the Assad regime for engagement with talks about a Constitution.

Acting after last week’s fifth meeting of the Syrian Constitutional Committee, the opposition noted that the regime delegation again obstructed any advance by rejecting all proposals from it and from Pedersen.

A “Syrian opposition figure” said that withdrawal from the Committee was considered, but the move was suspended after a meeting with Russia’s envoy to the UN Office in Geneva, Gennady Gatilov.

“The decision is not in their hands, as they are still begging the Russians to put pressure on Syrian President Bashar Assad,” the source said.

ORIGINAL ENTRY, JAN 31: The UN envoy for Syria, Geir Pedersen (pictured), says talks on a Constitution have again failed to make any advance.

Pedersen said on Friday, after the fifth round of discussions in Geneva, that the Syrian Constitutional Committee had failed to begin drafting. He said the Assad regime’s representatives had once more rejected all proposals, both from him and from the opposition delegation.

The committee was first proposed in January 2018 and initially convened in October 2019. It consists of 150 delegates: 50 from the regime, 50 from some Syrian opposition groups, and 50 from civil society organizations.

The regime’s representatives have insisted that discussions address “sovereignty” and “terrorism” — its umbrella label for anti-Assad factions — before a new or amended Constitution is agreed.

Pedersen had sought to break the stalemate in talks with an inner group of 15 members each from the regime, opposition, and civil society delegations.

But he admitted defeat at Friday’s news conference, “I told the 45 members of the drafting body that we can’t continue like this, that the week has been a disappointment.”

Bassma Kodmani of the opposition delegation expressed hope that the new Biden Administration will get involved in coming weeks “so we keep this Constitutional Committee alive”.

She added, “It’s the only track of the political process that is alive, but it is in intensive care, to be honest.”

Ahmad Kuzbari, the regime’s co-chair of the talks, maintained that his group had put forward “positive” ideas. But the opposition co-chair, Hadi al-Bahra, said the regime delegation had not even engaged with drafting of a new Constitution.

Pedersen said he will try to go to Damascus for talks with regime officials, and will also speak to other parties.