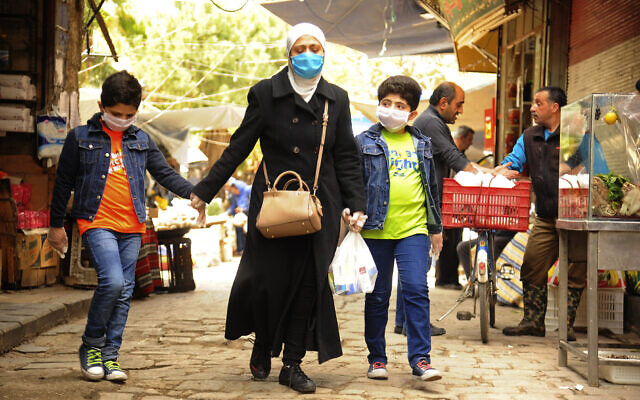 A woman and her sons walk on a street in Damascus, Syria amid the Coronavirus pandemic, April 18, 2020

The Assad regime has issued another reassurance about the oxygen shortage in hospitals in Damascus.

A Government Coronavirus team, chaired by Prime Minister Hussein Arnous, declared on Thursday that “an additional liquid oxygen tank, with a capacity of 10 tons, was installed in al-Mouwasat Hospital in addition to 100 spare oxygen cylinders for the Cardiac Surgery hospital”.

Continuing its response to reports of an oxygen shortage in Syrian hospitals, the Assad regime has declared that it will provide supplies to neighboring Lebanon.

Health Minister Hasan al-Ghobash said after a meeting with his Lebanese counterpart Hamad Hasan on Wednesday, “We will supply Lebanon with 75 tons of oxygen in installments of 25 tons a day for a period of three days.”

Ghobash, saying the first delivery had arrived in Lebanon, maintained that the shipment will not cripple supplies in regime-held areas amid a surge in Coronavirus cases.

Lebanon’s Hasan, who is linked to the Assad regime’s ally Hezbollah, offered support with a statement that the oxygen was a “direct gift” from Bashar al-Assad.

He said that there are about 1,000 patients on breathing assistance in emergency rooms” and that oxygen supplies “honestly are only enough to last for today”.

ORIGINAL ENTRY, MARCH 24: The Assad regime has denied an oxygen shortage in hospitals in Syria’s capital Damascus, amid a spike in the Coronavirus pandemic.

On Tuesday the site IranWire, citing “a medical worker in Syria”, said that overcrowded Damascus hospitals are unable to take in all Coronavirus patients as daily cases rise 10% to 20%. Some are using family and elite connections to get into the hospitals, while others are trying to buy oxygen cylinders for use at home.

The Health Ministry is still officially admitting only 17,743 cases and 1,183 deaths. Medics, activists, and residents have said from the start of the outbreak in February 2020 that the regime is minimizing the fatalities and infections.

But last week, in a rare admission of the scale of the pandemic, a Ministry official said Damascus hospitals have run out of intensive care beds. Patients are being transferred to other provinces.

On Saturday, Dr. Nabough al-Awa, a member of the panel dealing with Coronavirus, declared that regime areas are in a “third wave” of infections which is likely to be more damaging because of the new UK variant.