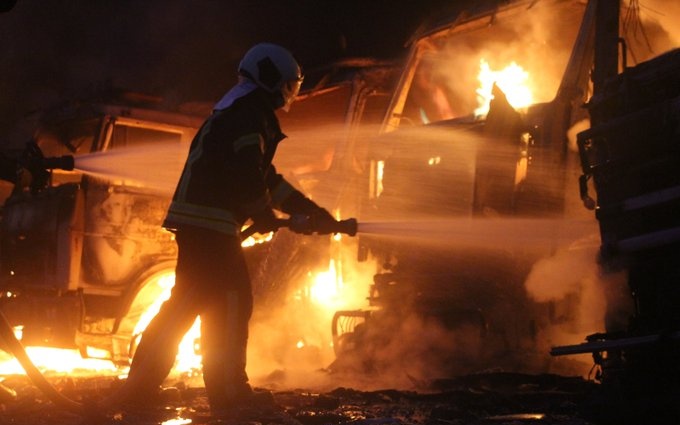 Warehouses and vehicles, at Sarmada in northwest Syria, were destroyed by the strike of a Russian surface-to-surface missile on Sunday.

The warehouses belong to the Turkish humanitarian organization IHH. 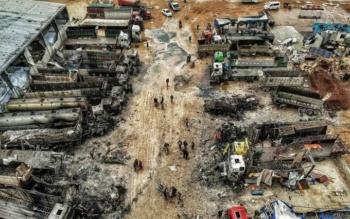 The Biden Administration has issued a statement which “strongly condemns” the missile strikes. State Department spokesman Ned Price noted the attack on the Bab al-Hama crossing with Turkey.

Bab al-Hawa remains the only U.N.-authorized humanitarian border crossing in Syria and remains the most efficient and effective way to provide life-saving humanitarian assistance to approximately 2.4 million Syrians every month.

Civilians, including civilian medical personnel and facilities, must never be the target of military action. This violence must stop – we reiterate our call for a nationwide ceasefire.

Russian drone footage of the missile strike on the Bab al-Hawa crossing:

Targets on Sunday included the Bab al-Hawa border crossing with Turkey, a gas facility, a cement factory, and several towns and cities.

A Russian surface-to-surface missile struck the town of Qah. Seven civilians were wounded in an attack on a truck and trailer park near Sarmada. Other strikes were close to crowded camps for displaced Syrians.

A gas facility was hit near Sarmada city in Idlib province and dozens of trailers carrying goods in a parking lot near the border crossing of Bab al Hawa were set aflame in the latest attack on fuel facilities that serve an economic lifeline for a region that is home to more than four million people.

Russia has been regularly attacking oil refineries near the border, and pro-Assad forces have shelled infrastructure and civilian sites. On Saturday, an assault on a hospital in western Aleppo Province killed seven people and injured 14, including medical personnel.

With Moscow blocking humanitarian aid through other crossings from Turkey and Iraq, Bab al-Hawa is a vital lifeline for the Turkish-supported opposition area. Russia’s airstrike was the first on the crossing in the 10-year Syrian conflict.

#Syria: aftermath of first ever #Russia|n airstrikes on trucks coming from Bab Hawa, on border with #Turkey. Along with oil facilities in NE. #Aleppo, #Russia strikes are focusing those days on economic assets outside Assad's control. pic.twitter.com/OtwUO7YWM5

Turkey’s Defence Ministry sent to a message to Moscow calling for attacks to stop immediately. However, Russian officials offered no comment.

About 4 million people live in opposition-held territory in Idlib and Aleppo Provinces. From April 2019 to March 2020, Russia and the Assad regime killed thousands of civilians and devastated infrastructure, including hospitals, schools, and markets in an offensive to overrun the area.

The offensive seized all of northern Hama Province and part of Idlib before it was halted by a Turkish-Russian agreement. However, Russian airstrikes and pro-Assad shelling have continued, with clashes between pro-Assad and anti-Assad forces on the periphery of the opposition area.

Watch the huge fires caused by the Russian shelling the border Bab Al-Hawa area this evening. The #WhiteHelmets are now working to extinguish the fires. pic.twitter.com/mnpodOKn2F