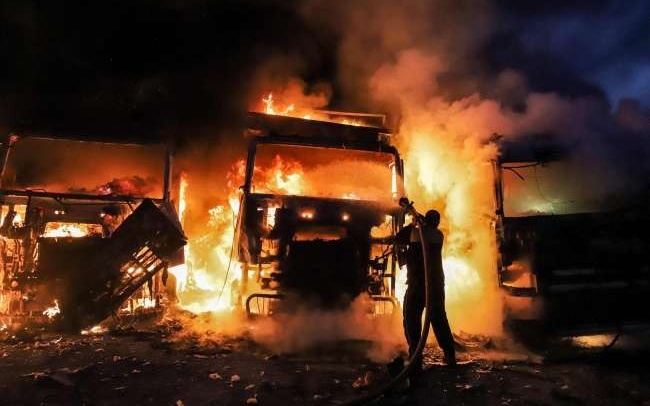 Local activists and citizen journalists assess that Russia’s offer to open crossings inside Idlib and Aleppo Provinces is preparation to close the last border crossing from Turkey and Iraq.

It seems Turkey didn’t say yes to opening those 3 crossings to regime-occupied areas — only Russia said so, while planning to veto the Bab al-Hawa cross-border assistance from the UN.

Most in liberated areas oppose opening these [internal] crossings: because they don’t want Covid to spread further, and they don’t want to strengthen the regime by trading with it.

Turkish security sources say the crossings that were opened in the past between opposition held areas and Assad regime-held areas have not been very functional.

Video of Sunday’s Russian airstrike on the Bab al-Hawa crossing from Turkey into Idlib Province:

On Sunday, Moscow’s forces fired surface-to-surface missiles on the opposition-held territory, including the Bab al-Hawa crossing from Turkey into Idlib Province. With Russia blocking all other crossings from Turkey and Iraq into northern Syria, Bab al-Hawa is the last link for humanitarian aid into Idlib and Aleppo Province, with more than 4 million people.

The attacks are part of an escalation of attacks by Russia and the Assad regime, hoping to strangle the area’s economy. Other targets include oil refineries and infrastructure such as a hospital, a gas plant, and a cement factory.

But on Tuesday, the Russian military’s Center for “Reconciliation” in Syria said the Saraqib and Miznas checkpoints in Idlib and the Abu Zeydin checkpoint in Aleppo could be reopened from Thursday.

The statement appeared to be an attempt to appease Turkey, the main external supporter of the opposition area.

Earlier on Tuesday, Turkish officials summoned Russia’s Ambassador to express objections and concerns over the missile strikes and artillery shelling, including on the al-Maghara hospital in western Aleppo Province on March 21.

Russia and the Assad regime seized some of the opposition territory, including all of northern Hama Province and part of Idlib Province, between April 2019 and March 2020. Thousands of civilians were killed, and more than a million were displaced.

An agreement between Turkish President Recep Tayyip Erdoğan and Russian counterpart Vladimir Putin halted the offensive. However, Russian airstrikes and Assad regime shelling have continued, and there have been clashes between pro-Assad and anti-Assad forces on the periphery of the “deconfliction zone”.

Meanwhile, Russia has used its UN Security Council position to cast vetoes shutting down all but one crossing from Turkey and Iraq.