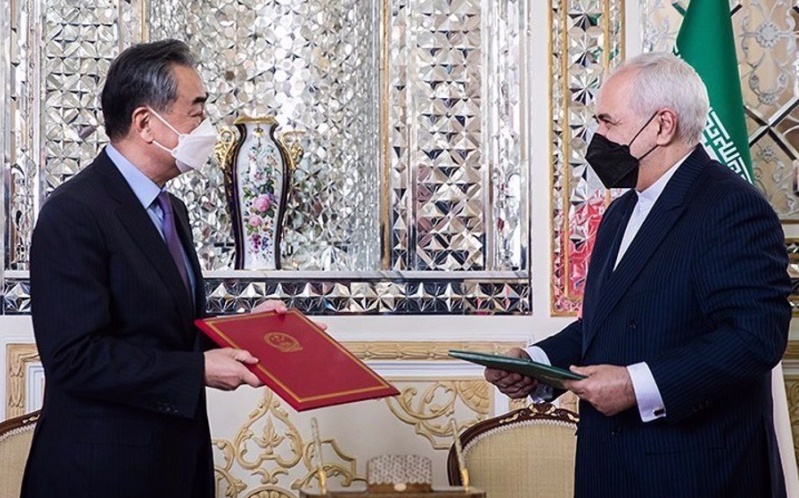 China’s Wang Yi, on a two-day visit to Tehran, and Mohammad Javad Zarif signed the document in a ceremony on Saturday.

No details have been released, but reports say it may include Chinese investments in Iran’s energy and infrastructure sectors.

A draft obtained by The New York Times last year said Beijing is committing to $400 billion investment over the 25 years in fields such as banking, telecommunications, ports, railways, health care, and information technology, over the next 25 years. China will receive a regular, heavily-discounted supply of Iranian oil.

There were also provisions for military cooperation, including joint training and exercises, joint research and weapons development, and intelligence sharing.

#Iran FM @JZarif and #China FM Wang Yi signed the 25-year partnership document today in Tehran. Per officials of both countries, the document is a roadmap that pushes Iran-China relations to a comprehensive and strategic level. pic.twitter.com/kAYhhDoiJF

China is already Iran’s top trading partner, including for Tehran’s oil exports. Iranian officials said the agreement was proposed by Chinese President Xi Jinping on his January 2016 trip to Iran.

Hesamoddin Ashena, an advisor to President Rouhani, tweeted praise of “an example of a successful diplomacy” and Iran’s power “to participate in coalitions, not to remain in isolation”.

But critics of the Rouhani Government say the deal concedes too much to China. However, Parliament Speaker Mohammad Baqer Qalibaf gave public support on Sunday for the “major element for production of power” in a “Look to the East and Eurasia approach through a balanced and economy-oriented foreign policy”.

Wang’s two-day visit in Tehran is part of a six-country tour of West Asia. It will include discussions with Iranian President Hassan Rouhani and Foreign Minister Mohammad Javad Zarif on “key regional and international developments”.

Wang and Zarif will sign a 25-year “road map of cooperation”. They will also open an exhibition of historical documents, on the 50th anniversary of the establishment of diplomatic relations between Tehran and Beijing.

On the eve of the visit, Chinese Vice Foreign Minister Ma Zhaoxu spoke about the 2015 nuclear deal between Iran and the 5+1 Powers, and US re-entry after the Trump Administration’s withdrawal in May 2018:

There are some new changes in the current Iranian nuclear situation. All parties should increase their sense of urgency.

The United States should take practical actions as soon as possible. The US and Iran should meet each other halfway and re-enter the deal.

The Biden Administration has accepted an invitation from the European Union for informal discussions, but the Supreme Leader and Rouhani Government have said the US must remove sanctions before any talks.