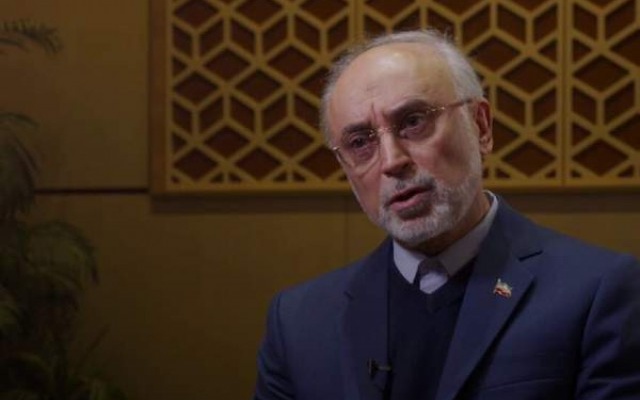 Head of Iran Atomic Energy Organization, Ali Akbar Salehi: “You are the one who has left the deal, and you have to come back to the deal, and then we sit on the table”

Iran publicly rejects sequenced nuclear talks, linking the removal of US sanctions to Tehran’s return to compliance with the 2015 deal between Tehran and the 5+1 Powers (US, UK, France, Germany, China, and Russia).

The rebuff of the approach means it is unlikely that there will be any advance, at least in the open, before Iranian Presidential Elections in June.

The Trump Administration withdrew from the deal in May 2018 and imposed comprehensive sanctions six months later. The Rouhani Government has since suspended adherence to the agreement’s provision, renewing enrichment of 20% uranium and limiting inspections by the International Atomic Energy Agency.

The head of Iran’s Atomic Energy Organization, Ali Akbar Salehi, told the US outlet PBS Newshour in an interview:

We have already the deal, the JCPOA [Joint Comprehensive Plan of Action] deal. It’s a deal that was negotiated for over two years. And the U.S. administration at one time felt that they want to leave the deal.

You are the one who has left the deal, and you have to come back to the deal, and then we sit on the table within the framework of the 5+1 and talk whatever issues that are deemed to be talked about.

Foreign Minister Mohammad Javad Zarif, asked by journalist Laura Rozen about a move towards technical talks, amplified the Iranian line: “This is not the case. If the U.S. lifts all sanctions, we will come back to full compliance….[It is] not complicated.”

An “Iranian expert” said that third parties — likely to be a Gulf State such as Oman, a European Union member, or Switzerland — have proposed a “gesture for gesture” start to the negotiations. One example is the US allowing Iranian access to some of its foreign bank assets for humanitarian transactions, while Iran lifts its suspension of one of the nuclear deal’s provisions.

A “senior State Department official” pointed towards the approach:

Possible U.S. steps with regard to sanctions can be on the table but we need to get into a conversation with Iran, whether direct or indirect.

The President will not take unilateral steps when it comes to removing sanctions. Any substantial move by the US will have to be part of a process in which both sides take actions.

Rob Malley, the Biden Administration’s official in charge of the Iran process, said there would be no change because of Tehran’s domestic timetable: “We don’t intend to base the pace of our discussions on the Iranian elections — the pace will be determined by how far we can get consistent with defending US national security interests. In other words, we won’t rush or slow things because of the Iranian elections.”

It appears that intermediaries were trying making some progress in what the first gesture for gesture would be to break the deadlock….But it appears the Iranians are a bit changing their tune.

That might be indicative of…an internal debate happening in Iran, that might basically be an indication that there are…voices inside Iran who might prefer not to make progress before the elections.

President Hassan Rouhani is having to step down after two terms in office. Hardliners, who took control of the Iranian Parliament last year, are favored to prevail. Judiciary head Ebrahim Raisi, who lost to Rouhani in 2017, lead opinion polls.