Iran Rejects Invitation to Nuclear Talks With US 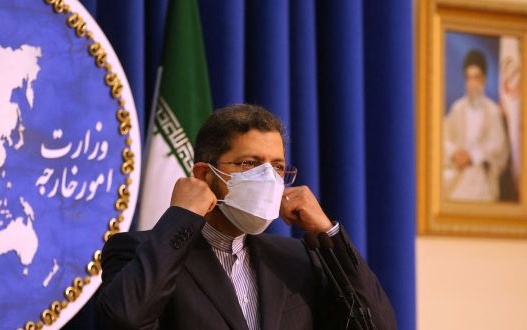 French President Emmanuel Macron has told Iranian counterpart Hassan Rouhani that the Islamic Repubic must make moves towards talks with the US and the particpants in the 2015 Iran nuclear deal.

Macron’s office said in a statement, “Having reminded [Rouhani] of the efforts made by France with its partners in the last years to reach a negotiated solution, the head of state stressed it was important that Iran made clear and immediate gestures so that dialogue can resume with all parties to the Vienna deal.”

But Rouhani maintained the line, in a Cabinet meeting on Wednesday, that US sanctions must first be removed:

If we delay the lifting of the sanctions even for an hour, we have violated the rights of the people and the most important public right is that the sanctions must be lifted and we should all work for this goal….No new step has been taken by the new US administration in lifting the sanctions, which is the main issue.”

The President added anti-Israel rhetoric, “If those, specifically Zionists, who disgraced Trump in the political, domestic and international stages, become active again, it would be difficult to reach a conclusion.”

ORIGINAL ENTRY, MARCH 1: Iran has rejected an invitation to talks with the US and the participants in the 2015 nuclear deal with Tehran.

On February 19, the European Union issued the invitation after the Biden Administration said it would welcome discussions on a return to the agreement, from which the Trump Administration withdrew in May 2018.

After saying for more than a week that it was considering the initiative, Iran issued its rejection on Sunday. Foreign Ministry spokesman Saeed Khatibzadeh (pictured) said Tehran had concluded the “time was not right”:

There has been no change in America’s positions and actions. The Biden Administration has not set aside Trump’s maximum pressure policy, nor has it announced its commitments.

The Islamic Republic is insisting that the US lift comprehensive sanctions, imposed in November 2018, before talks resume. Khatibzadeh repeated yesterday, “The way forward is quite clear. The US must end its illegal and unilateral sanctions and return to its JCPOA commitments.”

The Biden Administration and the Europeans in the agreement — the UK, France, and Germany — are calling on Iran to return to compliance.

Of course, in response to the West's breaches of the agreement, our respected administration didn't leave the JCPOA. It gradually withdrew from a part of its commitments. This is reversible. If the other side carries out its duty, Iran will also reconsider its decision.

Since June 2019, the Rouhani Government has suspended provisions in the deal because of the US sanctions. The process has escalated since December, when the Iranian Parliament commanded the Government to take more significant steps: advanced nuclear centrifuges have been installed and Tehran has returned to its pre-2015 level of 20% enriched uranium, which potentially can be further enhanced to military-grade 90%.

The Supreme Leader proclaimed last week that Iran may soon reach 60% enrichment, while maintaining, “We are not after nuclear weapons.”

A White House spokesman said Sunday, “While we are disappointed at Iran’s response, we remain ready to reengage in meaningful diplomacy to achieve a mutual return to compliance with JCPOA commitments.”

She said the US will consult with the remaining 5+1 Powers — the UK, France, Germany, China, and Russia — about next steps.