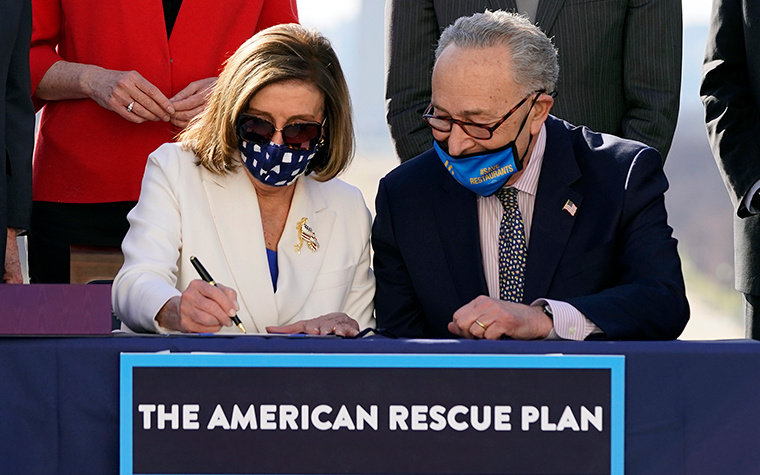 Congress passes the $1.9 trillion American Rescue Plan, combatting the effects of Coronavirus in the most significant anti-poverty program since the 1960s.

The House confirmed passage by 220-211 on Wednesday. All but one Democrat voted for the Plan. No Republicans supported the measures.

The Senate adopted the bill last Saturday. President Joe Biden is expected to sign the Plan on Friday, following an address to the nation on Thursday night.

It mobilizes Federal resources for a $300/week unemployment benefit until September 6 to millions of Americans; authorizes further assistance for struggling families such as health care subsidies, tax credits, rental and mortgage assistance, and $12 billion for food aid; distributes a one-time direct payments of up to $1,400 for Americans making less than $75,000/year; and allocates $350 billion in support for states and cities.

Economists project that the initiative will reduce the number of impoverished Americans by 1/3 and potentially cut child poverty in half.

“Help Is on The Way”

Biden hailed the “historic piece of legislation” in a statement: “This…is about giving the backbone of this nation — the essential workers, the working people who built this country, the people who keep this country going — a fighting chance.”

This is the most consequential legislation that many of us will ever be a party to. On this day, we celebrate because we are honoring a promise made by our president, and we join with him in promising that help is on the way.

House Minority Leader Kevin McCarthy tried to bury the measures, the most expansive to help the poor, deprived, and unwell since the “Great Society” almost 60 years ago: “This isn’t a rescue bill. It isn’t a relief bill. It’s a laundry list of left-wing priorities that predate the pandemic and do not meet the needs of American families.”

Senate Minority Leader Mitch McConnell snapped, “The American people are going to see an American comeback this year, but it won’t be because of this liberal bill.”

I proudly supported the American Rescue Plan on the floor of the House of Representatives today, and our work is unfinished.

We must keep fighting for policies that meet the scale and scope of this crisis and set us on a pathway to a just and equitable long-term recovery.