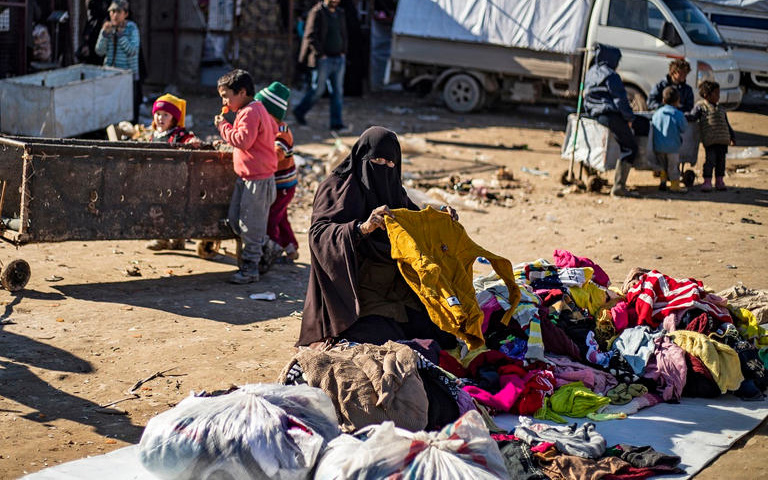 A UN Special Rapporteur has restated the call for 57 countries to repatriate their nationals from squalid” camps in northeast Syria.

Fionnuala Ní Aoláin, responsible for the promotion and protection of human rights while countering terrorism, said, “I think of the many grandmothers I have spoken to over the course of the last couple years, many of whom are literally watching their grandchildren starve on cellphones in western countries that refuse to return their mothers and children.”

A UN-appointed board of independent experts emphasized:

Thousands of people held in the camps are exposed to violence, exploitation, abuse and deprivation in conditions and treatment that may well amount to torture or other cruel, inhuman or degrading treatment or punishment under international law, with no effective remedy at their disposal.

An unknown number have already died because of their conditions of detention.

The Special Rapporteur rejected claims that cooperation was impossible with with the US-supported, Kurdish-led Syrian Defence Forces overseeing the camps, or that western countries lacked the resources to rehabilitate and reintegrate all those returned from Syria.

“I would urge those countries to take back their nationals; the SDF, the ‘de facto’ authorities do not want these individuals in their camps, they are pleading for them to be taken home”, Ní Aoláin said.

ORIGINAL ENTRY, JAN 31: UN officials have called on countries to repatriate 27,000 children from the overcrowded al-Hol camp for displaced persons in northeast Syria.

Many of the camp’s residents are relatives of Islamic State fighters. The complex is guarded by the US-supported, Kurdish-led Syrian Democratic Forces, who expelled ISIS from the region between 2017 and 2019.

UN head of counterterrorism Vladimir Voronkov told a meeting of the Security Council on Friday, “The horrific situation of the children in al-Hol is one of the most pressing issues in the world today.”

Al-Hol has about 62,000 residents, according to UN humanitarian officials. More than 80% are women and children.

Aid workers and activists have warned about the poor conditions in al-Hol, with little running water and shortages of food.

UN officials reported earlier this month that 12 camp residents, including a woman, were murdered between January 1 and January 16.

The UN’s Voronkov said the camp’s children “remain stranded, abandoned to their fate”. He explained that they may be preyed upon by ISIS enforcers and “are at risk of radicalization”.

The official said some countries — including Russia and Kazakhstan, who convened the virtual meeting — “have collectively repatriated nearly 1,000 ildren and their family members”. Ukbezistan has brought back 73 children and 25 women, and in December Germany and Finland arranged the return of 18 children and five women.

But most European nations have resisted repatriation of their nationals. In late November, the charity Rights and Security International reported that up to 35 British children and 15 women are being held in “barbaric” conditions in the al-Hol and al-Roj camps.