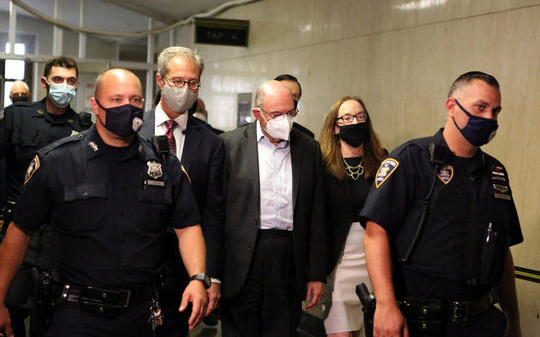 Allen Weisselberg, Chief Financial Officer of the Trump Organization, at his indictment at the Lower Manhattan Criminal Courts and District Attorney’s office, July 1, 2021

Donald Trump risked acknowledgement of the Trump Organization’s alleged tax evasion scheme, in a speech to a rally in Sarasota, Florida on Saturday night.

Trump railed against “prosecutorial misconduct” and said the criminal case was “unfair”. He claimed the “radical left” was attacking him “because I have been fighting for you against the corrupt establishment”.

ORIGINAL ENTRY, JULY 2: The Trump Organization is indicted over a 15-year tax evasion scheme, with executives given lucrative benefits hidden from authorities.

Chief Financial Officer Allen Weisselberg was charged on Thursday afternoon with grand larceny and tax fraud over avoidance of $900,000 of taxes on $1.76 million in unreported perquisites, including leased Mercedes-Benzes, bonuses, a rent-free apartment, and school tuition for two relatives. The benefits were recorded in an internal spreadsheet, according to prosecutors. He was also indicted over improper receipt of $133,000 in state and local tax refunds.

The executive, who could be given more than 10 years in prison if convicted, pleaded not guilty.

The 15-count indictment charged the Trump Organization with criminal tax fraud, falsification of business records, and evasion of payroll taxes on the benefits.

Carey Dunne, the general counsel for Manhattan District Attorney Cyrus Vance, said at the arraignment in the State Supreme Court in Manhattan, “To put it bluntly, this was a sweeping and audacious illegal payments scheme.”

Prosecutors have built their case on Weisselberg’s personal tax returns and bank records, some of which was provided in months of cooperation by his ex-daughter-in-law Jen Weisselberg. They are reportedly seeking his testimony against others in the Trump Organization, including Donald Trump.

Trump declared after the hearing that the indictments are a “continuation of the witch hunt that started when I came down the escalator” in Trump Tower to launch his Presidential campaign in June 2015. He declared to say if he was worried about possible testimony by Weisselberg, proclaimed that his assistant of 48 years is an “honorable man”: “I’m with him all the way.”

New York State and Manhattan prosecutors are expected to build a further case against Trump and the Organization over manipulated property values to obtain loans and tax benefits.

Trump’s long-time lawyer and fixer Michael Cohen testified in 2019 to Congress about the fraudulent manipulation.

In February, the case was advanced when — after years of effort — the Manhattan District Attorney’s office obtained eight years of Trump’s business records and tax returns. State Attorney General James joined the criminal investigation in May.