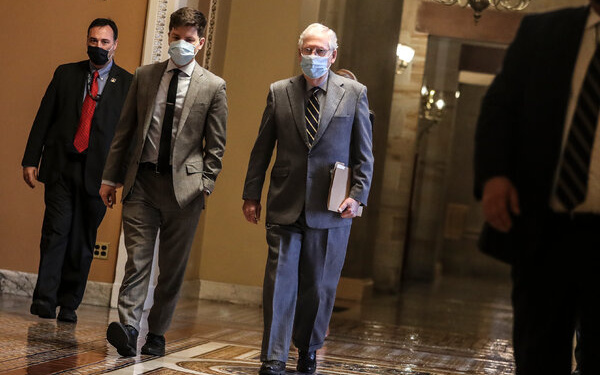 Sen. Lisa Murkowski of Alaska, one of only five Republican senators to reject dismissal of Donald Trump’s impeachment trial, says she and colleagues were given little notice of Sen. Rand Paul’s attempt to scrap the process.

Murkowski said she was not aware of Paul’s motion until Tuesday morning.

I think just about everybody was quite surprised to be in a position to actually take not only a public position but a vote on this today. And so I think that there were a lot that were perhaps not as prepared. I don’t feel I am as prepared as I wanted.

All but five of 50 Republican Senators vote to dismiss the impeachment trail of Donald Trump for “incitement of insurrection”, with his instigation of the January 6 attack on the US Capitol in which five people died.

With all 50 Democrats supporting the trial, The Senate voted 55-45 to proceed. However, the outcome indicated that the Republicans will again protect Trump, the only President in US history to be impeached twice, from any punishment for his actions.

Seventeen Republicans must join the Democrats for the 2/3rds majority needed to convict.

The five GOP senators who backed a trial were Susan Collins of Maine, Lisa Murkowski of Alaska, Mitt Romney of Utah, Ben Sasse of Nebraska, and Patrick Toomey of Pennsylvania.

Several of the senators who voted to dismiss later said that they remain open-minded about the trial, which begins on February 9.

But Sen. Collins summarized, “I think it’s pretty obvious from the vote today that it is extraordinarily unlikely that the President will be convicted. Just do the math.”

The Senate’s top Republican, Mitch McConnell of Kentucky — who had shielded Trump for four years, including during the Trump-Russia affair, the record-setting Government shutdown in January 2019, and Trump’s impeachment over his pressure on Ukraine in 2019 to smear Joe Biden, who is now President — had signalled earlier this month that he might back conviction.

McConnell said last week that the Capitol attackers were “provoked” by Trump’s “lies” in a speech outside the White House, calling on his followers to march on the building to block the Congressional confirmation of President-elect Biden.

However, on Tuesday he joined the effort, launched by Sen. Rand Paul of Kentucky, to dismiss the trial.

McConnell made no public comment about the vote. “People familiar with the session” said he did not speak up during a private Republican luncheon before the session.

Paul said the trial was “deranged” and offered an unsupported claim that the proceedings would be unconstitutional: “Private citizens don’t get impeached. Impeachment is for removal from office, and the accused here has already left office.”

The Senate has conducted trials for former officials and judges who have been impeached. The chamber set the precedent in 1876, trying Secretary of War William Belknap who resigned just before impeachment.

Senate Majority Leader Chuck Schumer of New York noted, “The theory that the impeachment of a former official is unconstitutional is flat-out wrong by every frame of analysis. It has been completely debunked by constitutional scholars from all across the political spectrum.”

A group of 150 prominent legal scholars, including a founder of the conservative Federalist Society, wrote last week:

If an official could only be disqualified while he or she still held office, then an official who betrayed the public trust and was impeached could avoid accountability simply by resigning one minute before the Senate’s final conviction vote.

The framers did not design the Constitution’s checks and balances to be so easily undermined. History supports a reading of the Constitution that allows Congress to impeach, try, convict and disqualify former officers.

Sen. Murkowski said she believes it is now impossible for Republican colleagues to vote to convict after seeking dismissal of the trial.

That’s why I thought it was a little unfortunate that we had this very spontaneous vote on an extraordinarily significant matter without the considered debate and analysis. People had to make really quick decisions.