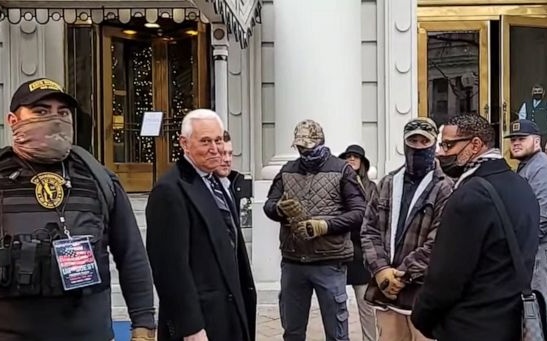 The Justice Department is investigating links between Donald Trump’s self-proclaimed “political dirty trickster” Roger Stone and far-right participants in the attack on the US Capitol on January 6.

The investigation will establish whether Stone, who was pardoned by Trump by December over crimes linked to the Trump-Russia scandal, played any role in the organization of the attack to disrupt Congressional certification of President-elect Joe Biden. A full criminal investigation could follow, said “a person familiar with the matter“.

Justice Department officials have debated for weeks whether to open a full investigation. The operative spoke at a rally the day before the Capitol Attack with members of far-right groups as his bodyguards outside the Capitol. That in itself is not a criminal act; however, the FBI has video and other material connecting Stone to Capitol attackers.

The New York Times identified at least six members of the Oath Keepers, a far-right extremist group, who guarded Mr. Stone and were later among the hundreds storming the Capitol. Two of the men have been charged with conspiring to attack Congress.

Sources also said the Department are investigating the far-right conspiracy theorist Alex Jones and Ali Alexander an organizer of the “Stop the Steal” rally before the Capitol Attack.

Jones pledged $500,000 to the rally in exchange for a “top speaking slot of his choice”. He also helped secure funding from Julie Jenkins, a Trump megadonor who is heiress to the Publix supermarket chain.

Stone, who has worked for Trump for more than 40 years, was convicted on seven felony charges, including obstructing the House inquiry into Trump-Russia, lying to Congress, and witness tampering. He was the liaison between the Trump campaign and WikiLeaks, as the organization published e-mails, connected to the 2016 campaign of Hillary Clinton, hacked and stolen by Russian operatives.

Trump commuted Stone’s 40-month sentence in July and included him in a spree of pardons, including for those involved in the contacts with Russia. But the pardon does not protect Stone from future prosecution.

In an online statement earlier this month, Stone denied any role in the “lawless attack”. He said that Oath Keepers members “should be prosecuted” if there is proof that they have broken the law, but asserted that he “saw no evidence whatsoever of illegal activity by any members”.