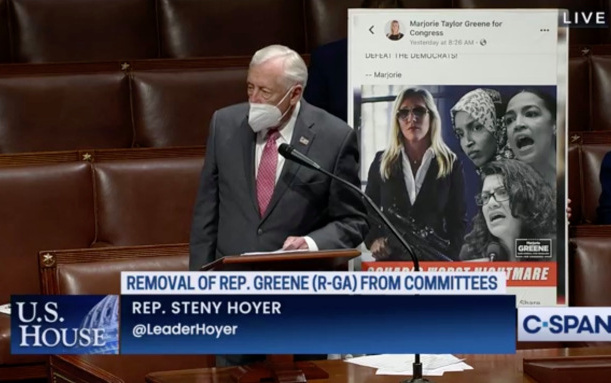 Eleven Republicans joined 219 Democrats in support of the expulsion. No Democrats voted against the measure.

The vote was the first time that a majority party had removed a member of the opposition party from committee assignments.

Speaking on the House floor, Greene finally recanted her support of executing Democrats including House Speaker Nancy Pelosi; her endorsement of the QAnon conspiracy movement; her claim that mass shootings, including the February 2018 killing of 17 staff and students at a Florida high school, were “fake”; her assertion that a plane never hit the Pentagon on September 11, 2001; her explanation that a “Jewish space laser” caused California wildfires; and her recycling of the QAnon line that Supreme Court Justice Ruth Bader Ginsburg was replaced with a body double.

Greene said she now believed the 9-11 attacks “absolutely happened” and that school shootings were “absolutely real”. However, she did not apologize and warned that if legislators wanted to “crucify” her, it would create a “big problem”.

The second-ranking Democrat, Rep. Steny Hoyer of Washington, gave an impassioned speech about Greene’s threats to legislators, posing with an AR-15 assault rifle beside images of Reps. Alexandria Ocasio-Cortez of New York, Ayanna Pressley of Massachusetts, Rashida Tlaib of Michigan, and Ilhan Omar of Minnesota.

"They're not 'The Squad' They're Ilhan. They are Alexandria. And they're Rashida. They are people. They are our colleagues … this is an AR-15" — Steny Hoyer printed out one of Marjorie Taylor Greene's incendiary tweets pic.twitter.com/pXOmMtyrFs

Speaker Pelosi chided Republicans, including Minority Leader Kevin McCarthy, for refusing to take action: “You would think that the Republican leadership in the Congress would have some sense of responsibility to this institution. For some reason, they’ve chosen not to go down that path.”

But instead of supporting the punishment, McCarthy threatened retaliation against Democrats with a “long list” of Representatives whom they wish to remove from committees, “If this is the new standard, I look forward to continuing out the standard.”

House Republicans supported the threat with a proposal remove Rep. Omar from the Foreign Affairs Committee. They cited comments, for which Omar has apologized, including the assertion that Israel had “hypnotized the world” from ignoring it “evil doings”.

Before the vote, Greene tried to extract her own retribution, lying in a fundraising appeal that Ocasio-Cortez had encouraged protesters to “punch a cop”.

Rep. Dean Phillips: "I'm here tonight to say to my brothers & sisters in Congress & all around our country, I'm sorry. For I've never understood, really understood, what privilege really means. It took a violent mob of insurrectionists & lightning-bolt moment in this very room." pic.twitter.com/PqnoBMiQDu

In a secret ballot, GOP Representatives voted 145-61 not to strip Rep. Liz Cheney of Wyoming, the third-ranking Republican in the chamber, of her committee positions. Trumpists had wanted punishment for Cheney over her vote to impeach Donald Trump for incitement of insurrection in the January 6 attack on the US Capitol.

The developments dramatically portrayed the split in the Republican Party between Trumpist insurgents, including Greene, and the “establishment” faction.

A third, smaller group — conservative Republicans who want to remove the Trumpists and believe the establishment is failing — was represented by Rep. Adam Kinzinger of Illinois, who said it was “embarrassing” that McCarthy was doing more to defend Greene than to defend Cheney. Rep. Jaime Herrera Beutler of Washington added that the attempt punish Cheney was a proxy for the larger issue of Republican Party subservience to Trump.

This is about the direction of our party and whether or not we’re going to be a minority dedicated to just one person or a united Republican majority.

In videos and social media posts, Greene has supported the execution of House Speaker Nancy Pelosi. She has claimed that mass shootings — including the killing of 17 staff and students at a Parkland, Florida high school in February 2018 — were fake, publicly harassing survivor David Hogg. She has said that California wildfires were started by a “Jewish space laser”.

Despite mounting evidence of the threats and conspiracy theories, Greene has refused to apologize. Instead, she has doubled down on her invective against Democrats. The QAnon supporter claimed that an e-mail campaign with the attacks has raised more than $160,000 in one day.

The Senate’s top Republican, Mitch McConnell of Kentucky, finally castigated Greene this week, saying that she is a “cancer” in the party. McCarthy met her on Tuesday, and a conference of the House Republican leadership followed that evening.

On Wednesday, McCarthy issued a statement, “Past comments from and endorsed by Marjorie Taylor Greene on school shootings, political violence, and anti-Semitic conspiracy theories do not represent the values or beliefs of the House Republican Conference.”

However, he refused to remove her from the two committee posts she was awarded last week — the Education and Labor Committee and the Budget Committee. Instead, the Minority Leader spent most of his statement assailing Democrats.

He said the second-ranking House Democrat Steny Hoyer had rejected a proposal, taking Greene off the Education and Labor Budget Committees but putting her on a committee overseeing small businesses.

"They’re going to judge her on things that were said, that she has now denounced, before she was ever a member of Congress. … The voters decided she could come and serve." pic.twitter.com/jXLdonnC7V

In a late-night meeting, McCarthy balanced between defense of Greene and Cheney. He said presentation of a united front is needed, and told legislators that he wanted the leadership team to “stay together”.

Cheney then survived the vote, despite several members of the ultraconservative Freedom Caucus accusing her of “aiding the enemy” with her vote for impeachment of Trump.

However, the power of the Trumpist movement was demonstrated when about half the Representatives gave a standing ovation to Greene as she rose to speak. Sources said that while refusing publicly to recant, she apologized to the session and said she no longer believed in the conspiracy theories.

McCarthy indicated ongoing protection of Greene, claiming that her removal from committees would be “a partisan power grab” as Democrats try to strip other Republicans of their positions.

On Thursday, the House Democrats will call a vote of the full chamber over Greene’s committee assignments.

Top Senate Republicans, distanced from any political cost over decisions in the House, stepped up criticism of Greene.

“She’s not going to be the face of the party,” said Sen. Rick Scott of Florida, the chairman of Senate Republican campaigning. Scott, governor in 2018 at the time of the Parkland school killings, said Greene’s claim of faked shootings was “disgusting”.

It's beyond reprehensible for any elected official, especially a member of Congress, to parrot violent QAnon rhetoric and promote deranged conspiracies like the Pentagon wasn't really hit by a plane on 9/11. It’s not conservative, it’s insane.