Biden Sets Out Foreign Policy, Including Firm Lines on Russia and China 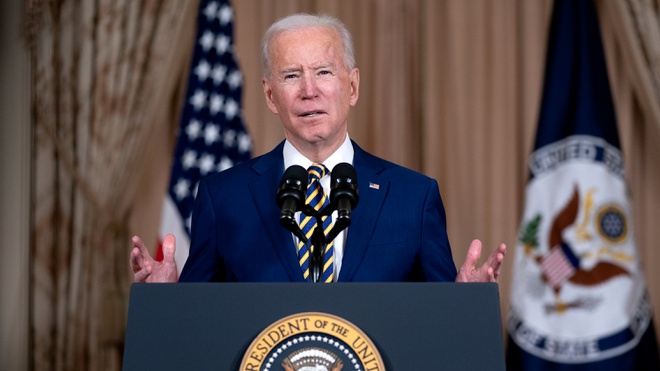 President Joe Biden sets out an approach to foreign policy emphasizing diplomacy and pledging to “re-engage the world”.

The address to State Department staff in Washington and overseas included the pledge of a firmer line against Russian operations and an order ending American support of Saudi offensive operations in the conflict in Yemen.

[This] is the message I want the world to hear today.

America is back. Diplomacy is back at the center of our foreign policy. As I said in my Inaugural Address, we will repair our alliances, engage with the world once again, not to meet yesterday’s challenges, but today’s, and tomorrow’s.

In an allusion to State Department who were often belittled, pressured, and dismissed amid the turmoil of the Trump Administration, Biden said, “This has been a difficult few years,” and assured the staff, “You are the face of America, and it matters. You are the center of all that I intend to do.”

Biden exalted “defending freedom, championing opportunity, upholding universal rights, respecting the rule of law and treating every person with dignity”. He spoke of “global challenges from the pandemic to the climate crisis, to nuclear proliferation”. And he drew specific lines with Beijing and Moscow, citing “the growing ambitions of China to rival the United States and the determination of Russia to damage and disrupt our democracy”.

Declaring that the Administration will be “engaging our adversaries and our competitors diplomatically”, Biden referred to his agreement with Russia to extend the START treaty, the only remaining nuclear accord between the two countries, for five years.

But he continued with allusions to Moscow’s involvement in the 2016 US Presidential campaign, cyber-operations, and nerve agent attack against opposition figure Alexei Navalny.

At the same time, I made it clear to President Putin — in a manner very different from my predecessor — that the days of the United States rolling over in the face of Russia’s’ aggressive actions, interfering with our elections, cyber attacks, poisoning its citizens are over.

Biden denounced the subsequent sentencing of Navalny to 32 months in prison, and asserted: “We will not hesitate to raise the cost on Russia and defend our vital interest in our people. And we will be more effective in dealing with Russia when we work in coalition and coordination with other like-minded partners.”

The President laid out a similar mix of firmness and diplomacy in his statement on China.

But we are ready to work with Beijing when it’s in America’s interest to do so. We will compete from a position of strength by building back better at home, working with our allies and partners, renewing our role in international institutions and reclaiming our credibility and moral authority, much of which has been lost.

He emphasized that the Administration is “in close cooperation with our allies and partners to bring together the international community”, and that he has been speaking with the Senate’s top Republican, Mitch McConnell, to ensure a bipartisan approach.

There can be no doubt, in a democracy, force should never seek to overrule the will of the people or attempt to erase the outcome of a credible election. The Burmese military should relinquish power they have seized, release the advocates and activist and officials they had detained, lift the restrictions on telecommunications and refrain from violence.

After he promoted global cooperation over climate change and the Coronavirus pandemic, noted the reversal of Donald Trump’s “Muslim Ban” on entry into the US, and spoke of the promotion of diversity and leading on LGBTQ issues, Biden concluded:

The leadership of the diplomats of every stripe doing the daily work of engagement created the very idea of a free and interconnected world. We are a country that does big things. American diplomacy makes it happen. And our administration is ready to take up the mantle and lead once again.