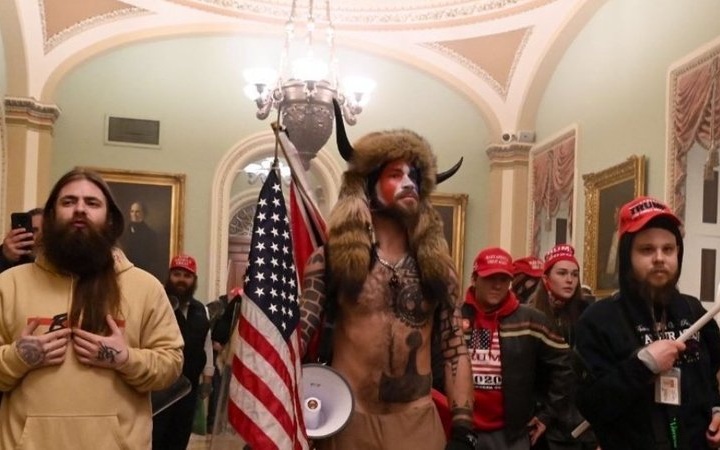 Trump supporters inside the Capitol after storming the building, January 6, 2021

Klobuchar, as teller, after the votes have been counted: "The report we make is that Joe Biden & Kamala Harris will be president & vice president." Standing ovation in the House chamber.

Pence: This is a "sufficient declaration." He then hands off to the chaplain for a prayer.

ORIGINAL ENTRY: Responding to months of incitement and disinformation by Donald Trump, hundreds of his supporters storm the US Capitol.

Less than three hours after Trump made a last-gasp statement outside the White House, the group — some of them armed — charged into the building. They were trying to fulfil Trump’s demand that Congress not certify the Electoral College victory of President-elect Joe Biden.

Some swept aside a few Capitol Police outside the main entrance. Others broke windows to enter. They roamed the halls and ransacked offices.

After Vice President Mike Pence adjourned the joint Congressional session, a few people were able to break into the Senate chamber. Armed security personnel stood, guns drawn, behind the doors of the House chamber.

There were sounds of gunfire. One Trump supporter was killed when she was shot in the chest by Capitol Police as a group tried to break through a barricaded door. Three people died from “medical emergencies”.

washington DC police said pipe bombs were recovered outside the offices of the Democratic National Committee and the Republican National Committee. Police also found a cooler with a long gun and Molotov cocktail in a vehicle on the Capitol grounds.

There were 52 arrests. Washington Mayor Muriel Bowser ordered a 6 pm-6 am curfew.
Despite Trump’s incitement and the subsequent violence, 122 of 211 House Republicans continued to support his refusal of President-elect Biden. Six of the GOP’s 50 Senators, including 2016 Presidential candidate Ted Cruz, pursued the effort.

Twelve Senators, including Cruz and Sen. Josh Hawley, and more than 140 GOP Representatives had said they would object to certification of Biden’s 306-232 Electoral College triumph.

Objections interrupted the process, forcing recesses separate debates for Senators and Representatives. The joint session is ongoing at 2 a.m.

EA on Monocle 24: Georgia’s Elections, Trump’s Shakedown, and The Blocking of President Biden
EA on TRT World, Monocle 24, and The Pat Kenny Show: The Trumpists Try to Shake Down US Democracy

Speaking soon after the invasion of the Capitol, President-elect Biden denounced “an assault on the citadel of liberty”, noting that Trump had stoked his supporters with lies and disinformation about the November election.

Biden forcefully depicted “a dark moment” in US history, appealed for calm, and held Trump accountable:

At their best, the words of a president can inspire. At their worst, they can incite.

This is not dissent. It’s disorder. It’s chaos. It borders on sedition and it must end now.

In contrast, Donald Trump embraced the attack. In a recorded video issued after Biden’s statement, he called on his supporters to “go home”. But he continued, “We love you. You’re very special people.”

To storm the Capitol. To smash windows, occupy offices. The floor of the United States Senate, rummaging through desks. On the Capitol, on the House of Representatives, threatening the safety of duly elected officials. It’s not protest. It’s insurrection….

The work of the moment and the work of the next four years must be the restoration of democracy, of decency, honor, respect, the rule of law….

We must step up.

Soon after Biden spoke, Democratic control of the Senate for the next two years was confirmed.

The new Senate is 50-50, with incoming Vice President Kamala Harris as the deciding vote.

Democrats On Course to Control Senate with Georgia Victories