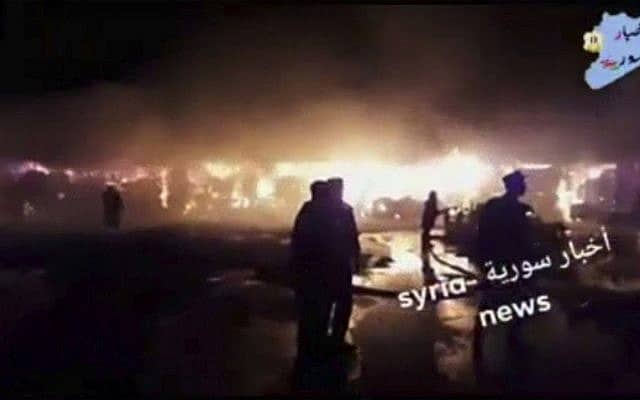 People watch flames rise from the Assad regime base at Kisweh, where Iranian personnel are reportedly stationed, after claimed Israeli missile strikes, May 8, 2018

In its first airstrikes inside Syria in 2021, Israel’s warplanes targeted sites near Damascus late Wednesday night.

Among the targets was the Iranian base at Kisweh, which has been periodically attacked by the Israelis, and regime positions in Suwayda Province in southeast Syria.

Syrian State news agency SANA, quoting the Assad regime’s military, wrote, “The Israeli enemy carried out an air attack by means of a barrage of missiles from the direction of the occupied Syrian Golan on some targets in the southern region.”

The agency did not report any casualties. The military issued its template declaration that most of the Israeli missiles were intercepted.

The Israelis have periodically fired missiles on the Kisweh base, including in May 2018, January 2019, and July 2019.

On Christmas Day the Israelis struck the Assad regime’s main complex for development of conventional and chemical weapons, the Scientific Studies Research Center, in Masyaf in Hama Province. The attack destroyed four buildings “probably used for mixing and casting components of missile engines and warheads”.

Throughout Syria’s 114-month conflict, Israel has regularly struck regime and Iranian positions. It is seeking to disrupt regime military links with Hezbollah and to pressure Iran to withdraw its forces and Iranian-led foreign militias.