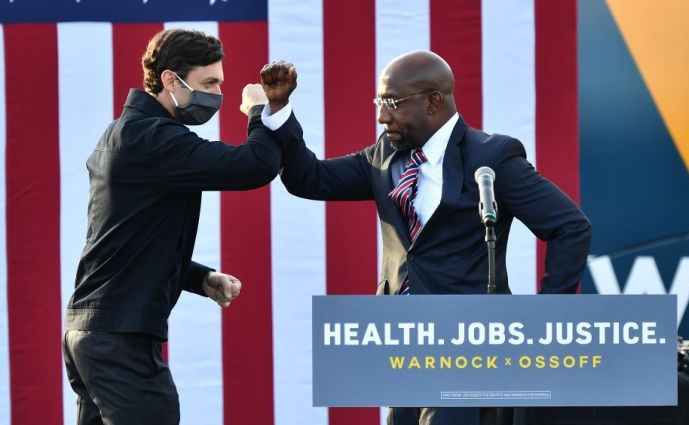 Combined with the victory of pastor Raphael Warnock over Sen. Kelly Loeffler in Georgia’s special runoff election, the outcomes produce a 50-50 Senate. Incoming Vice President Kamala Harris will be the deciding vote.

ORIGINAL ENTRY, JAN. 6: Democrats are on course to take control of the US Senate with two victories in Georgia runoff elections.

Most of the remaining ballots, including from early voting, are from Democrat-leaning areas such as DeKalb County — where Joe Biden defeated Donald Trump 83% to 16% in November — in the Atlanta suburbs.

Those final ballots could push Ossoff, who overtook Perdue as results came in, past the 0.5% margin of victory that would trigger a recount.

If the Democrat victories are confirmed, the Senate will be split 50-50, with incoming Vice President Kamala Harris as the deciding vote.

Just after midnight, Warnock spoke to supporters as a “son of Georgia whose roots are planted deeply in Georgia soil”: “We were told that we could not win this election, but tonight we proved that with hope, hard work, and the people by our side, anything is possible.”

The pastor, who will be the second Black American from the South to hold a US Senate seat since the 1870s, continued, “Washington has a choice to make – all of us have a choice to make: will we continue to divide, distract and dishonor one another, or will we love our neighbors as we love ourselves?”

Perdue narrowly failed to win a majority in November’s elections, forcing the runoff with Ossoff. Warnock led a “jungle primary” with candidates from both parties; however, he only claimed 33% of the vote.

But on Tuesday, both Warnock and Ossoff improve significantly in Democratic-leaning areas on the results from Biden’s 11,779-vote triumph in November. In contrast, turnout was lower in Republican parts of Georgia.

These racial turnout differentials weren't Alabama '17 levels, but Black runoff turnout was phenomenal and the Trump base just couldn't keep up. #GASEN https://t.co/CXXPR18eu6

About 3.1 million Georgians voted early, breaking the previous record of 2.1 million ballots — both early and on the day — in a Senate runoff in 2008. Election officials estimate the final total will be 4.6 million.

With new votes joining the tally, we are on a strong path. But even while we wait for more, let’s celebrate the extraordinary organizers, volunteers, canvassers & tireless groups that haven’t stopped going since Nov. Across our state, we roared. A few miles to go…but well done!

Donald Trump has yet to react. Instead, he was on Twitter after midnight calling on Vice President Mike Pence to overturn President-elect Biden’s victory in the Electoral College.

Pence is presiding over the Congressional session on Wednesday that will confirm the outcome. He has no power to intervene, although 12 Republicans Senators and more than 140 GOP Representatives have said they will object to Biden’s 306-232 triumph in the Electoral College.