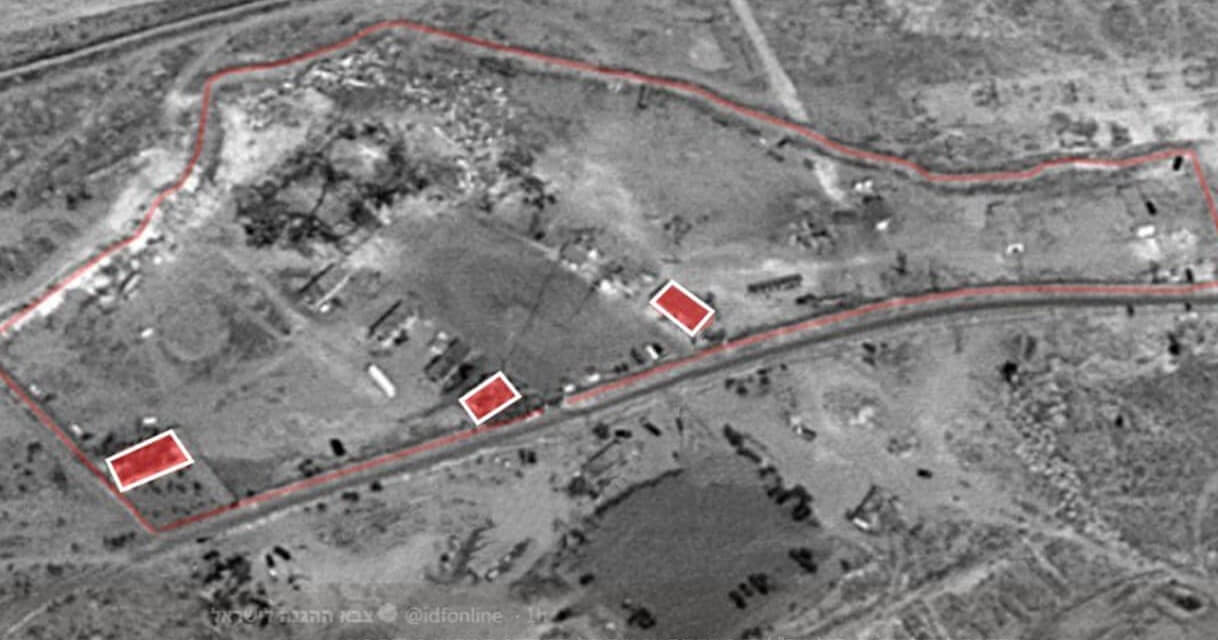 The Israel Defense Forces hits Iranian targets in southern Syria on Sunday night, claiming the strikes were a response to “dozens” of missiles launched by Iranian forces toward Israel.

“We warn the Syrian Armed Forces against attempting to harm Israeli forces or territory,” the IDF said in a statement, claiming the struck targets belonged to the Quds Force, the elite branch of the Revolutionary Guards. It said Assad regime air defense units were also attacked.

About 10 sites were targeted, including a weapons warehouses at the Damascus International Airport, an Iranian intelligence site, and an Iranian training camp, according to the Israeli military.

Assad regime media reported an “intense attack through consecutive waves of guided missiles” but, as on all occasions, declared that air defenses destroyed most of the “hostile targets”. A military official said, “Our air defense systems thwarted … an Israeli air aggression…and prevented it from achieving any of its goals.”

Earlier in the day, missiles fired toward the Israeli-occupied Golan Heights were intercepted by the Iron Dome defense system, the IDF said.

“The Iranian attack toward Israel’s territory is yet another clear proof of the intention behind Iran’s attempts at entrenchment in Syria and of the danger they pose to the State of Israel and to regional stability,” the statement pronounced.

The Israeli strikes concluded a confusing Sunday which began with reports of a blast in southern Damascus. Assad regime media initially said technicians had detonated an explosive, but later declared that they brought down seven missiles. Russia asserted that Israel was behind an attack on an airport.

Israel has periodically struck Assad regime, Iranian, and Hezbollah targets throughout Syria’s 94-month conflict. The attacks initially focused on Iranian transfers of weapons and missiles to Hezbollah and on the movement of Iranian and Hezbollah personnel to southwest Syria near the Israeli-occupied Golan Heights.

In the past year, with Prime Minister Benjamin Netanyahu demanding Iranian military withdrawal from Syria, Israel expanded the raids to targets Assad regime bases with Iranian personnel throughout the country.

The attacks were paused after a Russian surveillance plane was downed in September by an Assad regime air defense missile during Israeli strikes on western Syria. However, they resumed in December. Strikes on January 11 targeted the Kisweh base on Damascus, with Iranian personnel, and a warehouse at Damascus International Airport.

The IDF’s customary practice had been to refuse comment on all attakcs, but Netanyahu lifted the restriction this month.

Former IDF Chief of Staff Gabi Eisenkot told The New York Times that thousands of targets were struck during his time in the post. Netanyahu said a few days after the January 11 raids: “The accumulation of recent attacks proves that we are determined more than ever to take action against Iran in Syria.”

The family of US citizen Majd Kamalmaz, detained by the Assad regime in Syria in February 2017, have spoken for the first time.

Majd Kamalmaz, a 61-year-old psychotherapist from Arlington, Virginia, traveled to Damascus after the death of his father-in-law, checking on elderly relatives. His family say he was arrested at a checkpoint a day after he arrived.

“He felt safe going in. He’s an American citizen. He has nothing to do with politics. Why in the world would anyone try to harm him?” said Kamalmaz’s daughter Maryam.

Czech Ambassador Eva Filipi, who represents US interests, confirmed that Kamalmaz was held in a Damascus prison soon after his arrest in 2017, according to the family.

Maryam Kamalmaz said Filipi pledged to work for a speedy release. But then, the trail went cold, and “we did not hear from her again”.

She appealed to Donald Trump: “Hopefully, he can bring our father home safely.”

Kamalmaz has a wife and five children. Since 2012, he opened two mental health clinics in Lebanon and another in Jordan.

Medical services in opposition-held northwest Syria are being held by withdrawal of international aid.

Donors have suspended assistance because the Islamist bloc Hay’at Tahrir al-Sham has taken over parts of Idlib, Aleppo, and Hama Provinces.

The White Helmets civil defense issued a statement: “Already stretched doctors will no longer have resources needed to provide healthcare to more than three million people. This leaves them in an unimaginable situation: continuing their work without pay, with dwindling supplies, and facing unconscionable questions [of] which life to save, which patient to treat.”

The White Helmets said of the expansion of HTS control, pushing back rebel factions: “These changes have not affected the impartial delivery of services nor our organizational independence in any way.”