EA on TV and Radio: The Significance of Trump’s “Attempted Coup” and the Capitol Attack 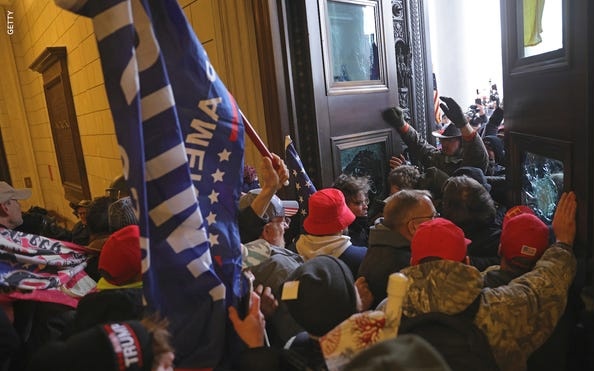 In the wake of the attack on the US Capitol, I spoke with 17 TV and radio outlets across nine countries on Thursday about the “attempted coup” for Donald Trump and about the significance for US politics and society in 2021.

My chat with Heather Hiscox of the Canadian Broadcasting Corporation:

"He may not have directly said attack the Capitol, but he knew what the prospects were." American politics professor @ScottLucas_EA accuses U.S. President Donald Trump of staging an attempted coup and tells @cbchh what the final days of the administration may look like. #CBCNN pic.twitter.com/CiDqP2ORAn

Trump will continue to say that the US system is standing against him. Now how many of these supporters will take that as a call to action?

Will Trump do this just to rail for the next two weeks or to set up, as I think he is, for a run for the Presidency in 2024?

"This is the greatest test of the American system since World War Two."

My chat with Jeremy Vine on Thursday afternoon:

This was a man who wanted to stay in power despite losing an election, the “most secure” election in US history, according to the Department of Homeland Security.

So this was his last move: to call on people to go to the Capitol He didn’t say, “Storm the Building”, but he knew full well what that call meant.

We also discuss the importance of Democrats winning both runoff elections in Georgia, giving Democrats control of the Senate through the deciding vote of incoming Vice President Kamala Harris.

A personal reflection, when asked by Vanessa Feltz how I would respond to a friend or family member who believes in Trump’s proclamation of a “stolen election” despite the absence of any evidence:

Unfortunately, well before Donald Trump became President, this is a polarized America. So it’s not information, it’s disinformation. It’s not just dialogue, it’s a lot of shouting.

Trumpists divide this into Us v. Them. The Us is their camp, and Donald Trump — who is a snake oil salesman, but a very good one — has made this his camp by saying, “We’re under attack. Under attack by the Democrats, the liberals, the Chinese, the immigrants, the fake news media.

You either have to leave the Trump camp — “maybe there is something beyond this” — or you get further and further entrenched in this division.

How do I respond to that? You come back not by ostracizing them, not by repeating the language of division. You try to get this back to what unites America.

Because in 13 days, the adults are back in the room.

In discussion with Joanna Bostock: Can the 25th Amendment be invoked by Vice President Mike Pence and the Cabinet to remove Trump from office?