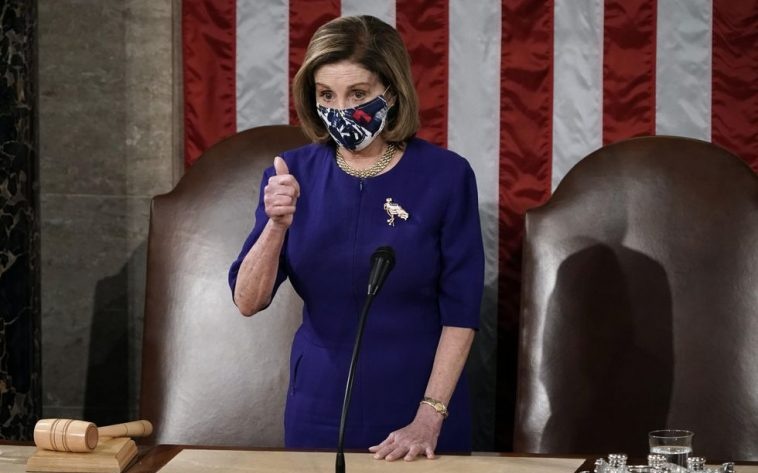 The US has set a new daily Coronavirus death record, with 4,402 deaths on Tuesday.

Meanwhile, the US House of Representatives has implemented a mask mandate, after three legislators tested positive for the virus following last Wednesday’s attack on the Capitol.

In the House, Speaker Nancy Pelosi pursued the order, with representatives fined $500 the first time they do not comply and $2,500 on the second occasion.

Pelosi put a mandate in place for the House floor in June, but there was no monetary penalty.

Reps. Pramila Jayapal of Washington, Bonnie Watson Coleman of New Jersey, and Brad Schneider of Illinois all tested positive after they were locked down during last Wednesday’s Capitol assault. They have each blamed Republican colleagues who refused to wear masks, even when they were offered them by staff during the siege.

At least nine Republican House members were not wearing masks for extended periods of time, according to a source and video of the lawmakers.

Jayapal, calling for “serious fines”, wrote of “the selfishness, the cruelty, and the idiocy of these people who have refused to take this seriously and who then went on to fuel these white nationalist insurrectionists”.

I am angry that after I spent months carefully isolating myself, a single chaotic day likely got me sick. I am angry that several of our nation’s leaders were unwilling to deal with the small annoyance of a mask for a few hours. I am angry that the attack on the Capitol and my subsequent illness have the same cause: my Republican colleagues’ inability to accept facts.

Magnetometers are being placed at selected entrances to the Chamber. Failure to complete screening or the carrying of prohibited items could result in denial of access to the Chamber.

Members are reminded that pursuant to the firearms regulations that Members received on opening day, firearms are restricted to a Member’s Office.

But at least five Republican lawmakers refused to go through the metal detectors. Among them was Rep. Lauren Boebert, a supporter of the QAnon conspiracy theory movement who has bragged about “packing heat” on the floor of the House.

Some legislators have vowed they will wear guns around the District of Columbia, even though the carrying of firearms is illegal.

New procedures in the House require us to go through a magnetometer before entering the floor. All because a new Republican member wants to carry heat onto the floor. Well, no surprise—5 Republican law and order members set off the magnetometer and then refused to be wanded.