After the Capitol Attack: Facing the Authoritarian, the Racists, and the Overtones of Fascism 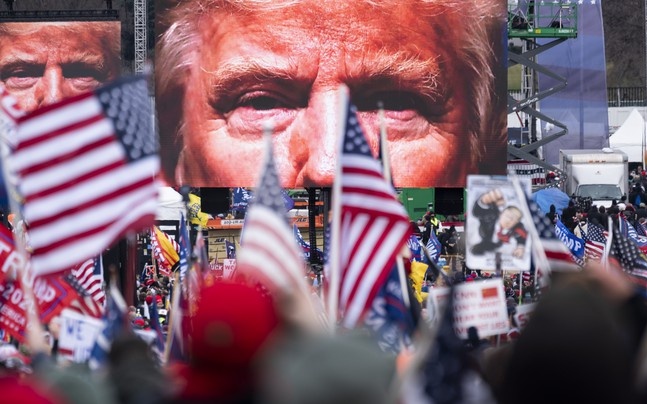 Let us be clear: among those involved in last Wednesday’s attack on the US Capitol were racists, some with overtones of fascism, who were encouraged and enabled by a would-be authoritarian named Donald Trump.

Attackers draped in Confederate and Trump as well as US flags invaded the House floor, occupied the offices of legislators such as House Speaker Nancy Pelosi, looted, damaged, and spread feces on the walls. Legislators hiding in the Senate chamber were only spared when a quick-thinking Capitol policeman diverted a mob from entering through an open door. In the House chamber, plainsclothes security stood with guns drawn behind the doors.

The damage of Trump and his supporters did not begin last week. In August 2017, he referred to the white supremacists who violently descended upon Charlottesville, Virginia, killed Heather Heyer, and wounded others as “very fine people.” Those three words ennobled each American white supremacist for the next 3 1/2 years. During the Presidential debate last September, he refused to condemn the supremacist groups and told The Proud Boys to “stand back and stand by”.

NAACP President Derrick Johnson told ABC News that Trump has “emboldened” acts of “political violence” and inflamed racial tensions throughout his Presidency by refusing direct condemnation of white supremacists while condoning acts of political violence by his supporters. Trump fulfilled that assessment in his speech outside the White House last Wednesday:

We will not take it anymore, and that is what this is all about….We will stop the steal….

We’re going to have somebody in there that should not be in there, and our country will be destroyed. And we’re not going to stand for that.

Some of those supporters set up a gallows and noose, a powerful symbol of America’s racial past, outside the Capitol. Inside the building, they pledged vengeance on the Vice President who refused Trump’s demand to block the certification of President-elect Joe Biden: “Hang Mike Pence.”

They assaulted police with pipes, flagpoles, and sticks. One officer was beaten with a fire extinguisher, later dying from his injuries.

Amid the violence, Three Percenters and The Proud Boys made their OK sign as a trolling gesture and a symbol of white power. In an iconic image of the day, a man walked through the Capitol with a Confederate flag, the same flag used by today’s neo-Nazis in Germany.

The American historian Timothy Snyder explained to Channel 4 News that the events on Capitol Hill “have everything to do with race from top to bottom”.

I would go one step further. Those who entered the Capitol building linked white supremacy and racism with their violent embrace of Donald Trump’s authoritarian rule. As Richard Seymour summarizes, the far-right movements propelling the attack are pursuing the decomposition of the system’s legitimacy, including calls to cancel elections or to deny their outcome), and the exploitation of organizational weaknesses. They are incited by would-be leaders trying to exploit links between these groups, elements in the police, and even staff within the White House.

Reaction by some Republicans and the US conservative media to this axis was laughable. Where former California Gov. Arnold Schwarzenegger compared the Capital attack to Germany’s Kristallnacht in 1938, Fox and Friends said it was compared Twitter’s ban of Donald Trump that was akin to Nazi violence.

Make no mistake – we witnessed an insurrection, or an “attempted coup” with authoritarian and even fascist fingerprints all over it.

I had always opposed a “no platform” policy, but it recent years I have rethought this in light of the far-right threat. No matter how much we engage with these movements, we also have to be able to excise the cancers of racism and fascism.

As these groups need the oxygen of publicity, drying up their communication channels by shutting down Twitter and Facebook accounts or even removing the far-right haven of Parler is just the first step. Internet providers and social media companies must be pressed to continue the rejection of disinformation and conspiracy theories.

Fascism does not just turn up with men in uniforms, some of them picture perfect for black comedy. History illustrates that the far right can appear amateurish and thuggish — but 10 years after the Beer Hall Putsch in Munich in 1923, Adolf Hitler became Chancellor of Germany.

From white right-wing legislators to wealthy white men who are not comfortable with a multi-racial US, the prospect is that, having found a media-savvy opportunist in Donald Trump in 2016, they can cultivate a smarter version in 2024. Even with Trump out of office, we will see the ongoing efforts, launched in the 1990s to challenge liberal norms and erode the power of institutions.

Impeaching Donald Trump will only be one step for the US to rid itself of fascist tendencies. Trump may go, but Trumpism as a euphemism for authoritarianism will not. The Biden Administration, Congress, the courts and law enforcement need to act through legitimate means. Social Media tech companies need to be vigilant and not be distracted by the smoke screen that they are punishing “conservatives”. The resurrection of the Fairness Doctrine, which was ended under the Reagan Administration in 1987, is needed for a responsible media presenting views across partisan lines. Reform of police and security personnel, ensuring they serve all Americans and uphold equality under the law, is necessary.

In his Inaugural Address in March 1933, facing perhaps the greatest domestic crisis before that of 2021, Franklin D. Roosevelt famously declared, “The only thing we have to fear is fear itself.”

Unfortunately, that is far too simplistic for today. Fear, intimidation, and hatred have been embodied at the highest level of the US Government in a man who, for a combination of ego and power, has tapped into the embodiment of racism and white supremacy.

This 21st-century New Deal must pursue the jobs and prosperity that many Americans feel are beyond them. It must reach out beyond party and ideological lines to seek the renewal of a bipartisan system. But it also must not shy away from a confrontation of the authoritarian and the damage of “white power”. To invoke another injunction from Roosevelt:

The first truth is that the liberty of a democracy is not safe if the people tolerate the growth of private power to a point where it becomes stronger than their democratic state itself.