Iran’s Supreme Leader Exploits Turmoil in Washington: “Even Their Friends Are Making Fun of Them” 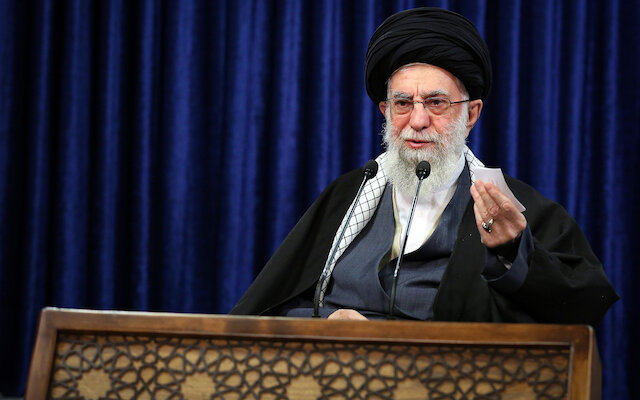 Iran’s Supreme Leader has moved quickly to exploit the turmoil of Wednesday’s attack on the US Capitol, instigated by Donald Trump.

Ayatollah Khamenei said in a televised speech on Friday that it is “weird” that some oeople “still worship the US as their idol”: “Today we can see what that big idol has turned into. This is their democracy. This is their election fiasco.”

In 2009, more than a million Iranians marched in the capital Tehran and across the country, protesting the disputed Presidential election “won” by Mahmoud Ahmadinejad. Khamenei intervened to proclaim Ahmadinejad the victory and to declare the marches illegitimate. Security forces killed scores of demonstrators and detained thousands of people, some of whom are still imprisoned today.

The Supreme Leader used the events in Washington to absolve himself and the regime over their actions 12 years ago:

In 2009, the US wanted to make Iran unstable. But that happened to themselves in 2020-21. You saw the people who breached the US Congress. The Americans sought to do the same in Iran. They wanted to create chaos and trigger a civil war.

#Iran’s leader, in a live televised speech, refers to recent developments in the #USA:" You are now seeing the situation in the US. This is their democracy and human rights. This is their election scandal. This is their American values. Even their friends are making fun of them". pic.twitter.com/BMvfXJOyHl

Khamenei also tried to turn criticism of the Iranian regime over human rights, and Iran’s economic crisis, back on the US:

This is their human rights: they kill a Black person once in every couple of hours or days, and the murderer is not prosecuted. These are ‘American values’ ​​that today are ridiculed.

This is their paralyzed economy. The US economy is truly paralyzed.

Khamenei said of the regional competition between Iran and the US for influence, “The US sees its interests in regional instability under the current circumstances, unless it is the dominant power in the region.”

The Supreme Leader echoed the Rouhani Government in saying that the Biden Administration can return the US to the 2015 nuclear deal, from which Donald Trump withdrew in May 2018.

However, he maintained, “We are in no hurry to get the US back” and emphasized “the lifting of sanctions”, including comprehensive measures imposed by the Trump Administration from November 2018. Khamenei said “compensating damages” to Iran “will be discussed later”.

The Biden Administration is likely to join the European participants in the deal — the UK, Germany, and France — in seeking a revised agreement covering Iran’s ballistic program and extending terminal dates for provisions.

President Hassan Rouhani has said the US can return “within an hour” to the Joint Comprehensive Plan of Action, but has ruled out any negotiations.

Khamenei: No Coronavirus Vaccine from US or UK

In another portion of his remarks, Khamenei intervened in the internal dispute over whether to import Coronavirus vaccines.

The Rouhani Government has pursued the imports, and Central Bank head Abdolnasser Hemmati said last month that the US Treasury had waived sanctions so Tehran could purchase the vaccines with Iranian funds from South Korea.

But the Revolutionary Guards have loudly objected to any imports. Deputy Commander Brig. Gen. Mohammad Reza Naqdi said last week that vaccine producers are aiming to kill hundreds of millions of people, reducing the world’s population by 20%.

The Supreme Leader proclaimed: “I have already said it to government officials, and now announce it publicly. The import of American and British vaccines is prohibited.”

Ignoring the successful production of vaccines by Pfizer/BioNTech, Moderna, and Oxford/Astra Zeneca, he asserted:

Had the Americans managed to produce a vaccine, they would not have faced such a mess today in their own country.

I really don’t trust them. Sometimes they want to test the vaccine on other nations.

#Iran’s leader bans importing American & British vaccines for the #COVID19, saying "a few days ago in the US, 4,000 people died in 24 hours…If they knew how to make a vaccine, they would have consumed it themselves, so they would not see that many deaths". pic.twitter.com/GWtNOhtRjR

He also questioned imports from France, citing an infected blood episode in the 1990s, but said the Government might bring in vaccines from “reliable sources”.

The pandemic spiked in Iran in November, with daily cases reaching almost 14,000 and deaths passing 450.

Government containment measures have curbed the spike, with 6,360 cases and 103 deaths on Thursday.