UPDATED House May Begin Impeachment of Trump on Monday 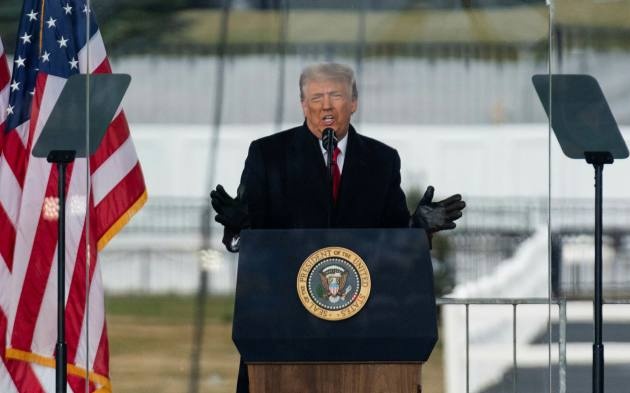 Donald Trump addressing supporters outside the White House, urging them to go to the Capitol and “fight much harder” to block confirmation of President-elect Joe Biden, January 6, 2021 (Bloomberg)

A third Republican senator has said Donald Trump can be impeached over his instigation of violence and last Wednesday’s attack on the Capitol.

Sen. Pat Toomey of Pennsylvania said to Fox TV, “I do think the president committed impeachable offenses….[His] behavior this week does disqualify him from serving.”

He joins Lisa Murkowski of Alaska — “I want [Trump] out. He has caused enough damage” — and Ben Sasse of Nebraska.

But Toomey did not join calls for an immediate process, doubting the efficacy of impeachment with only 10 days left in Trump’s term. He expressed concern that House Democrats might “politicize” the proceedings.

Speaker Nancy Pelosi announced on Friday that Trump will be brought up on formal charges if he does not resign “immediately” over his incitement of Wednesday’s attack on the US Capitol.

“If the president does not leave office imminently and willingly, the Congress will proceed with our action,” Pelosi wrote to colleagues.

The Speaker instructed the House Rules Committee to be ready for an impeachment resolution or legislation creating a nonpartisan panel of experts to consult with Vice President Mike Pence about Trump’s fitness to serve.

Trump would be the first President in history to be impeached twice. He was charged over his pressure on Ukraine to smear Joe Biden, now President-elect, and was tried in the Senate in January 2020 where a Republican majority prevented his conviction.

The effort is being led by Democrats, but a few Republican legislators have said they will support Trump’s removal. They include Sen. Lisa Murkowski of Alaska and Rep. Adam Kinzinger of Illinois. Sen. Ben Sasse of Nebraska also indicated he will consider articles of impeachment.

Republican Senator Ben Sasse of Nebraska has blamed President Trump for the violent assault on the Capitol, calling it an "inevitable and ugly outcome."@SenSasse joins us now. pic.twitter.com/bZHDKuXEWx

Murkowski told the Anchorage Daily News, “I want him to resign. I want him out. He has caused enough damage.”

The Senate’s top Republican, Mitch McConnell, sent a memorandum to senators that no trial can be convened before Trump’s term ends on January 20, unless all 100 senators agree to proceed sooner. However, he told confidants that he is finished with Trump, according to sources.

Pelosi and other Democratic leaders are calling on Vice President Pence and the Cabinet to invoke the 25th Amendment, declaring Trump unfit to serve. However, a Pence spokesman said the Vice President is against the step.

The Speaker also asked the Chairman of the Joint Chiefs of Staff, Gen. Mark Milley, about “preventing an unstable president from initiating military hostilities or accessing the launch codes” for nuclear weapons.

“The president-elect believes we must accelerate distribution of the vaccine while continuing to ensure the Americans who need it most get it as soon as possible,” spokesman TJ Ducklo said in a statement. Biden “supports releasing available doses immediately, and believes the government should stop holding back vaccine supply so we can get more shots in Americans’ arms now”.

White House sources said that Trump is raging that he will not resign. They also he expressed regret about releasing a video on Thursday in which he condemned the “heinous attack” on the Capitol, less than 24 hours after praising the attackers, “We love you. You’re very special.”

Trump was permanently suspended by Twitter on Friday night “due to the risk of further incitement of violence”. Hours earlier, he had tweeted that he would not attend President-elect Biden’s inauguration, the first President since 1869 to skip the event.

“Democrats familiar with her remarks” quoted Pelosi from a private call with House colleagues:

He’s unhinged. We aren’t talking about anything besides an unhinged person.

We can’t move on. If we think we can move on then we are failing the American people.

Adam Schiff, who led the impeachment case against Trump over the Ukraine scandal, issued a statement: “Congress should act to begin impeachment proceedings as the only instrument wholly within our power to remove a president who has so manifestly and repeatedly violated the Constitution and put our nation at grave risk.”

What the Congress decides to do is for them to decide

But Republican Sen. Murkowski was unsparing in her case for impeachment, citing Trump’s attempt to get Vice President Pence to block Biden’s confirmation as President-elect. After Pence refused, Trump spoke to supporters outside the White House, urging them to go to the Capitol and stop the Congressional certification of the Electoral College vote.

His vice president told him that morning, “I do not have the constitutional authority to do what you have asked me to do. I cannot do it. I have to protect and uphold the Constitution.”

Even after the Vice President told President Trump that, he still told his supporters to fight. How are they supposed to take that? It’s an order from the President. And so that’s what they did. They came up and they fought and people were harmed, and injured and died.

She added other reasons for Trump to depart now:

He’s not going to appear at the inauguration. He hasn’t been focused on what is going on with COVID. He’s either been golfing or he’s been inside the Oval Office fuming and throwing every single person who has been loyal and faithful to him under the bus, starting with the Vice President.