Democrats Proceed on Trump Impeachment, But Debate Timing of Trial 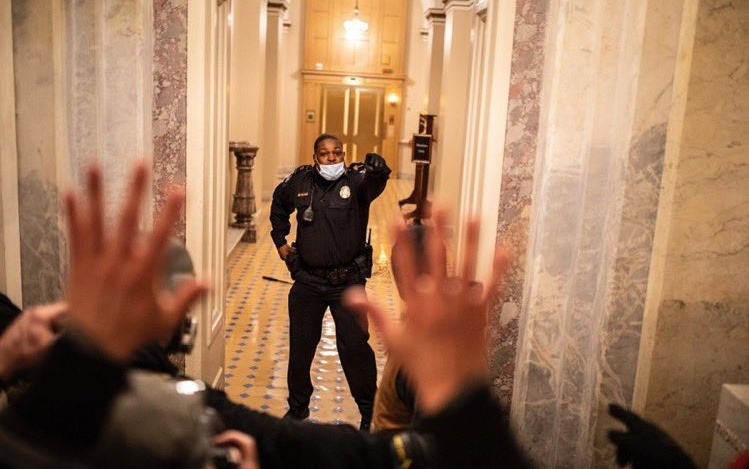 Capitol Police officer Eugene Goodman faces pro-Trump attackers at the US Capitol, January 6, 2021. Goodman led the mob away from the Senate chamber where legislators were hiding (New York Times)

Democrats proceed with plans for the impeachment of Donald Trump, while debating the timing of his trial in the Senate.

More than 210 of the 222 Democrats in the House — nearly a majority of the 435-seat chamber — signed an impeachment resolution by Sunday afternoon that Trump will “remain a threat to national security, democracy, and the Constitution” if he was not removed in the last 10 days of his term.

In a letter to colleagues, Speaker Nancy Pelosi said another resolution will ask Vice President Mike Pence and the Cabinet to invoke the 25th Amendment, declaring Trump unfit to serve.

However, Pence’s office has indicated that the Vice President will refuse. So Pelosi spoke of impeachment for “high crimes and misdemeanors”, including “willfully inciting violence against the government of the United States”.

In protecting our Constitution and our democracy, we will act with urgency, because this president represents an imminent threat to both. As the days go by, the horror of the ongoing assault on our democracy perpetrated by this president is intensified and so is the immediate need for action.

But party leaders differed over the timing of a trial, with the Senate’s top Republican Mitch McConnell almost certain to block proceedings in the upper chamber before President-elect Joe Biden’s inauguration on January 20.

Biden indicated through his ally, Rep. James Clyburn of South Carolina, that he would like a trial to take place after the first 100 days of his Administration.

Clyburn said on Sunday that impeachment may occur by Wednesday, but “the Senate will decide later what to do with that”. He added, “Let’s give President-elect Biden the 100 days he needs to get his agenda off and running.”

The Democrats will have a narrow Senate majority, after last week’s election of Georgia Sens. Raphael Warnock and Jon Ossoff. Conviction would strip Trump of the perquisites of his Presidency, including a large pension and a security detail, and prevent him from standing for the Presidency in 2024.

With a 2/3rd majority required to convict, Democrats would have to be joined by 17 of the Senate’s 50 Republicans.

While most Republican legislators maintained silence, Sen. Pat Toomey of Pennsylvania repeated his weekend call on Trump to resign.

Sen. Lisa Murkowski of Alaska said on Friday, ““I want him to resign. I want him out. He has caused enough damage.” Sen. Ben Sasse of Nebraska has also indicated he will support proceedings.

So far, Adam Kinzinger of Illinois is the only GOP Representative to back impeachment. On Wednesday, after the attack on the Capitol, 121 of the 211 Republicans in the House backed Trump’s call to block the confirmation of President-elect Biden.

But former Republican leaders raised their voices about the seriousness of Trump’s threat and the Capitol attack. Former California Gov. Arnold Schwarzenegger posted a powerful video message, comparing Nazi Germany in the 1930s to the political violence in the US in recent days.

I grew up in Austria. I’m very aware of Kristallnacht, or the night of broken glass. It was a night of rampage against the Jews carried out in 1938 by the Nazi equivalent of the Proud Boys.

Wednesday was the day of broken glass right here in the United States. The broken glass was in the windows of the United States Capitol. But the mob did not just shatter the windows of the Capitol, they shattered the ideals we took for granted. They did not just break down the doors of the building that housed American democracy, they trampled the very principles on which our country was founded.

Colin Powell — former Secretary of State, National Security Advisor, and Chairman of the Joint Chiefs of Staff — said on national TV that he is no longer a member of the Republican Party.

“Right now, we need you to be real Americans, who will tell the truth, who will argue on the basis of facts,” he implored.

Current GOP Gov. Larry Hogan of Maryland was unsparing in his denunciation of Trump:

"There is no question in my mind that he was responsible for inciting this riotous mob" — Republican Gov. Larry Hogan of Maryland pic.twitter.com/L1dj4XU1TD