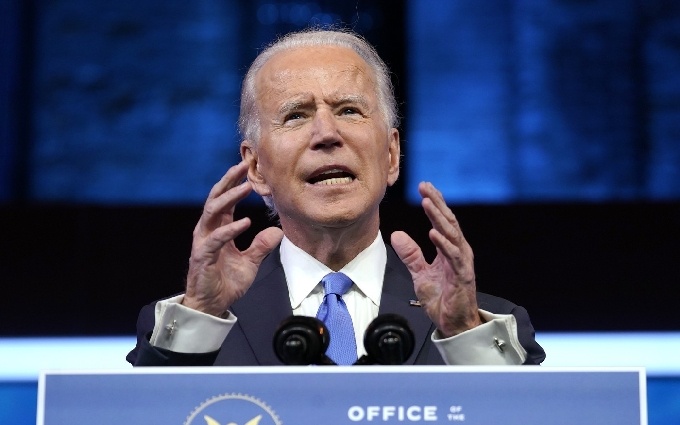 President-elect Joe Biden says it is “time to turn the page” after the Electoral College confirms his victory over Donald Trump.

After 2 1/2 months of Trump’s falsehoods about a “rigged election” and his camp’s loss in 60 of 61 lawsuits, the Electoral College vote proceeded without drama on Monday. Electors gathered in each of the state capitals to cast their ballots, which will now be sent to Congress for formal confirmation on January 6.

There were no “faithless electors” switching sides in the 306-232 tally for Biden.

The President-elect said in speech in Wilmington, Delaware:

Once again in America, the rule of law, our Constitution and the will of the people prevailed. Our democracy pushed, tested, threatened, proved to be resilient, true and strong.

Biden referred to the “biggest turnout” in US history, “This election now ranks as the clearest demonstration of the true will of the American people, one of the most amazing demonstrations of civic duty we’ve ever seen in our country.”

He continued, “[This] should be celebrated, not attacked.” Without referring directly to Trump’s disinformation, falsehoods, and calls for rejection of the outcome, the President-elect summarized:

One of the extraordinary things we saw this year was that every day Americans, our friends and our neighbors, often volunteers, Democrats, Republicans, Independents, demonstrating absolute courage, they showed a deep and unwavering faith in and a commitment to the law. They did their duty in the face of the pandemic. And then they could not and would not give credence to what they knew was not true. They knew this election was overseen, was overseen by them. It was honest, it was free and it was fair.

They saw it with their own eyes and they wouldn’t be bullied into saying anything different. It was truly remarkable because so many of these patriotic Americans are subject to so much, enormous political pressure, verbal abuse, and even threats of physical violence.

Biden did cite the losing candidate as he noted how the US system withstood pressure. He referred to two rulings from the Supreme Court quickly rejecting the Trump camp’s lawsuits trying to throw out votes and electors: “The Court sent a clear signal to President Trump that they would be no part of an unprecedented assault on our democracy.”

Emphasizing the themes of competence, responsibility, and unity that he has promoted since the election, he said:

You know, in this battle for the soul of America, democracy prevailed. We the people voted, faith in our institutions held, the integrity of our elections remains intact. And now it’s time to turn the page as we’ve done throughout our history, to unite, to heal.

He cited the “grim milestone” of 300,000 Coronavirus deaths in the US, passed on Monday, but pledged, “We faced difficult times before in our history. I know we’ll get through this one, but together.”

Trump did not refer to the Electoral College, but continued to rail on Twitter. He pushed disinformation about voting machines and insisted, “Many Trump votes were routed to Biden….This Fake Election can no longer stand. Get moving Republicans. Big Swing State Win!”

However, in Michigan the state’s top two Republican lawmakers stood firm against Trump’s efforts for a reversal of Biden’s victory.

[I] can’t fathom risking our norms, traditions and institutions to pass a resolution retroactively changing the electors for Trump, simply because some think there may have been enough widespread fraud to give him the win….

“That’s why there is not enough support in the House to cast a new slate of electors. I fear we’d lose our country forever. This truly would bring mutually assured destruction for every future election in regards to the Electoral College. And I can’t stand for that. I won’t.

Last month Trump summoned Chatfield and Michigan’s Senate Majority Leader Mike Shirkey to the White House, hoping to push the legislature into selection of Trump electors in defiance of Biden’s win by about 150,000 votes.

Michigan’s Democratic slate of electors should be able to proceed with their duty, free from threats of violence and intimidation. President-elect Biden and Vice President-elect Harris won Michigan’s presidential election. It our responsibility as leaders to follow the law and move forward in pursuit of policies that contribute to the betterment of Michigan.

Earlier in the day Chatfield and Speaker-elect Jason Wentworth stripped Rep. Gary Eisen of his committee assignments after he suggested that there might be violence to disrupt the state’s Electoral College vote.

In their response, Republican leaders cited the federal indictment of 13 far-right extremists for plots that included kidnapping Michigan’s Democratic Gov. Gretchen Whitmer, and the storming of the State Capitol by protesters — encouraged by Donald Trump — against Coronavirus restrictions.

“We have been consistent in our position on issues of violence and intimidation in politics — it is never appropriate and never acceptable,” wrote Chatfield and Wentworth. “We as elected officials must be clear that violence has no place in our democratic process. We must be held to a higher standard,”