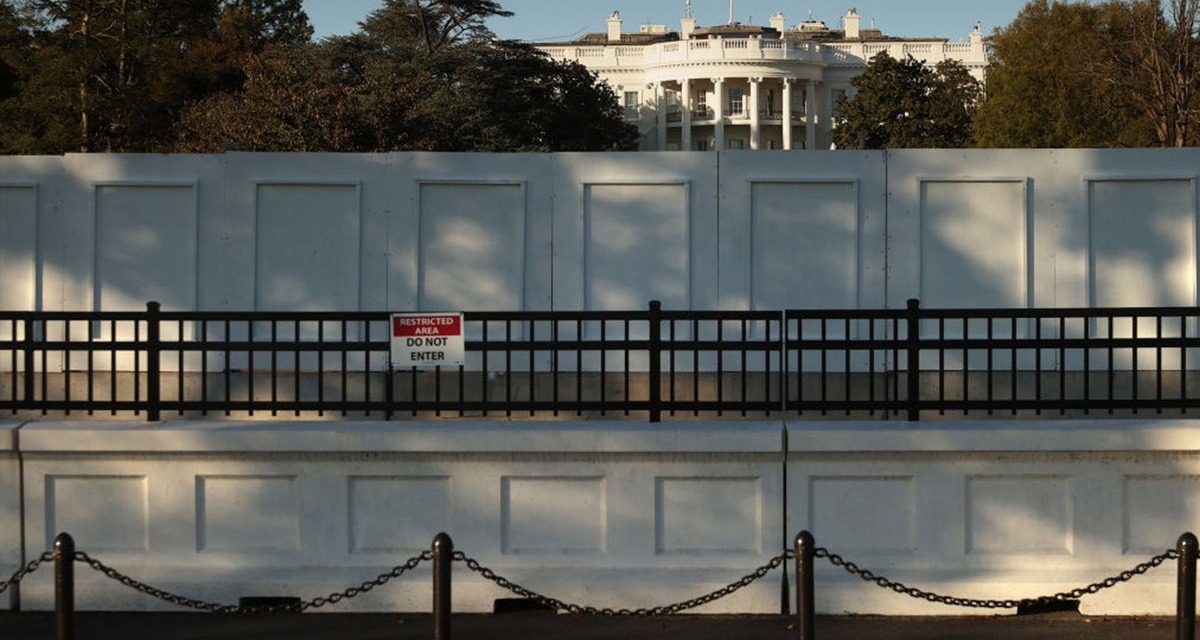 The White House behind a wall erected for Election Day on November 3, 2020

Democratic Presidential candidate Joe Biden, closing his campaign, has called for a responsible and effective approach to the Coronavirus pandemic which has killed more than 230,000 Americans: “Elect me and I’m going to hire Dr [Anthony] Fauci. And we’re going to fire Donald Trump.”

Biden’s pitch in Ohio, a key swing state in Tuesday’s election, responded to Trump’s threat on Sunday to dismiss the Government’s top Coronavirus expert. At a Sunday gathering, Trump reacted to a “Fire Fauci” chant, Trump said, “Don’t tell anybody, but let me wait until a little bit after the election.”

Responding to Trump’s dismissal of the threat and the statement by White House Chief of Staff Mark Meadows that “we’re not going to control the pandemic“, Biden said:

I’m never going to raise the white flag of surrender. We’re going to beat this virus. And we’re going to get it under control, I promise you.

Fauci and other medical and public health experts have warned that the US pandemic, already surging to record levels of daily cases and almost 1,000 daily deaths, will worsen in the winter without containment measures.

Trump has responded in the past two weeks by calling Fauci a “disaster” and the scientists “idiots”. He accused doctors of inflating numbers of deaths from Coronavirus to make more money.

Trump also falsely said that widely-distributed vaccine is imminent, and that the US has “rounded the corner” on the crisis. Meanwhile, his medical confidante Dr. Scott Atlas, a neuroradiologist and Fox TV commentator, has aggressively promoted “herd immunity” and denigrated the Government’s experts — even appearing in a 30-minute program on pro-Trump Russian State outlet RT.

“Most Deadly Phase of This Pandemic”

A Monday report from Dr. Deborah Birx, the coordinator of the White House Coronavirus Task Force, told officials to expect more days with over 100,000 cases. She criticized Trump rallies, with no social distancing and many attendees not wearing masks, for spreading the virus.

We are entering the most concerning and most deadly phase of this pandemic … leading to increasing mortality. This is not about lockdowns — It hasn’t been about lockdowns since March or April. It’s about an aggressive balanced approach that is not being implemented.

Like Fauci, Birx has been ostracized by Trump. The Task Force now meets only about once a week, and Vice President Mike Pence, the chair, has not attended a session in more than a month.

An administration official said Birx’s message “has been urgent for weeks,” but another noted, “She feels like she’s being ignored.”

Campaigning for Biden in Atlanta, Georgia, President Barack Obama challenged Trump’s “Covid-spreading tour” and his threat to fire Fauci: “He cares more about having big crowds than he does about keeping people safe.”