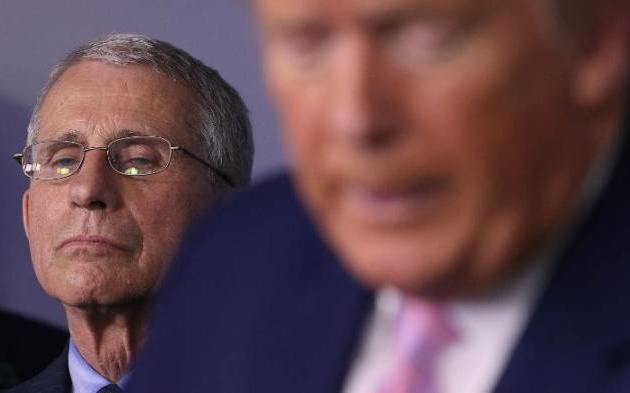 In his campaign day of insults, Donald Trump calls Dr. Anthony Fauci, the Government’s top infectious disease expert, a “disaster”, and says Fauci and other scientists are “idiots”.

Maintaining that the threat of Coronavirus is diminishing, despite a rise in cases in 49 of 50 states, Trump vented his anger at the assessments by the experts that the pandemic will worsen through the winter without containment measures.

In the past week, Fauci has also challenged the Trump campaign over its ad distorting his remarks to falsely claim his praise of Trump’s handling of the crisis. On Sunday he angered Trump with a prime-time interview in which he said tht he was not surprised Trump was infected, given Trump’s refusal to wear a mask and observe social distancing.

I was worried that he was going to get sick when I saw him in a completely precarious situation of crowded, no separation between people, and almost nobody wearing a mask.

When I saw that on TV, I said: “Oh my goodness. Nothing good can come out of that. That’s got to be a problem.” And then sure enough, it turned out to be a super-spreader event.

Trump: “This Guy’s A Disaster”

Trump has sidelined his medical experts since late May, including Fauci and White hoc Coronavirus Task Force coordinator Deborah Birx. His confidante is now Dr. Scott Atlas, a neuroradiologist and Fox TV commentator who advocates “herd immunity” — and who prompted a Twitter block earlier this week with his tweets, “Masks? NO!”

Trump has derided Fauci as “mistaken”, with his senior economic Peter Navarro lashing out in a USA Today editorial declaring the doctor “has been wrong about everything”. Trump’s press office sent an anonymously attributed list of supposed Fauci misjudgments to media outlets.

But yesterday Trump sharply escalated the rhetoric in a conference call which was supposed to present Administration success on the economy, with reporters invited to listen.

[Fauci] has been here for 500 years. Every time he goes on television, there’s always a bomb, but there’s a bigger bomb if you fire him. This guy’s a disaster.

Effectively admitting the political cost of removing Fauci — whose approval rating is 67% compared with 28% for Trump’s handling of the pandemic — before the November 3 election, Trump continued at a rally in Prescott, Arizona, “[Democratic Presidential candidate Joe] Biden wants to lock it down. He wants to listen to Dr. Fauci.”

The misinformation extended Trump’s mocking of Biden and Government experts at a Sunday campaign gathering, “If I listened totally to the scientists, we would right now have a country that would be in a massive depression.”

In fact, neither Biden nor Fauci have advocated a lockdown, but have called for effective containment to ensure that businesses and schools can open safely. Last week, Fauci told pathologists that no one wants to “shut down the country again”.

On Twitter, Trump tried a personal insult, jabbing at Fauci’s poorly-thrown pitch on Opening Day of baseball season this summer:

…P.S. Tony should stop wearing the Washington Nationals’ Mask for two reasons. Number one, it is not up to the high standards that he should be exposing. Number two, it keeps reminding me that Tony threw out perhaps the worst first pitch in the history of Baseball!

Biden: “We Need A Leader”

Biden, preparing for Thursday’s second and final Presidential debate, responded in a statement, “Mr. President, you’re right about one thing: The American people are tired. They’re tired of your lies about this virus.”

— but you have proven yourself yet again to be incapable of doing that.

Sen. Lamar Alexander, the chairman of the Senate Health Committee, implicitly challenged the “reopening” message of Trump and Dr. Atlas.

Dr. Fauci is one of our country’s most distinguished public servants. He has served 6 presidents, starting with Ronald Reagan. If more Americans paid attention to his advice, we’d have fewer cases of COVID-19, & it would be safer to go back to school & back to work & out to eat.