The Must-Win, Shift, and Landslide States for Biden v. Trump 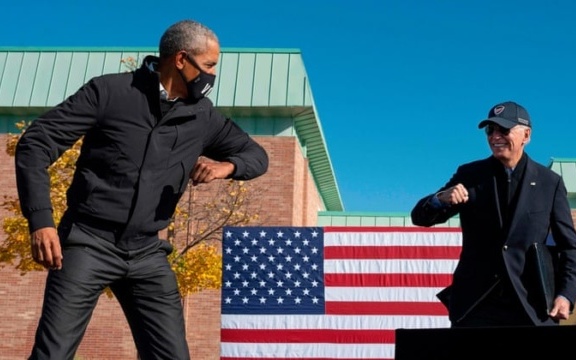 The US Presidential election is a collection of contests in the 50 states and the District of Columbia, in the 18th-century, sometimes confusing system of the Electoral College.

So how to stay on top of Tuesday’s decision between Joe Biden and Donald Trump? Here are the five states that will mark outcomes from a surprise Trump victory to a Biden landslide.

See also Essential Guide to Biden v. Trump: The 13 Swing States (and 2 Districts) That Will Decide the US Presidential Election

Democratic candidate Biden has to avoid Hillary Clinton’s 2016 downfall where, despite prevailing in the popular vote by more than 3 million votes, she lost the Electoral College because of 80,000 votes spread across Michigan, Wisconsin, and Pennyslvania.

The concern for Biden is that he loses Michigan, he is unlikely to prevail in the other two Rust Belt states.

But the good news for him: polling and local conditions make him a 95% favorite to win the Great Lake State.

Trump is well behind Biden in Michigan and Wisconsin, so his hope for a 2020 repeat comes down to victory in Pennsylvania. His problem? Biden’s polling lead in the Keystone State averages 3.6%, and he’s an 84% favorite to prevail.

Even if Trump overcomes that deficit, he has a mountain to climb. He has to overtake Biden in Florida and North Carolina, win the 50-50 state of Iowa, and hold onto once-solid Republican states Georgia and Arizona.

But if Pennsylvania falls to Biden, all of that is moot.

There has been a lot of talk since 2016 of “Red” Republican states becoming “Purple” contested areas with shifts to Democrats amongst changing urban/suburban patterns and a younger, increasingly multi-ethnic population.

If Biden wins Pennyslvania, he does not need either state to enter the White House but victories in one or both would mark a Democratic ascendancy which could long-term. That’s especially true if Democrats win the Senate race in Arizona, with former astronaut Mark Kelly an 80% favorite, and one or both of the Georgia Senate contests.

Parts of Texas, once a reliable Red state, have been trending Purple. Democrats gained two US House seats and almost upset Sen. Ted Cruz in the 2018 mid-terms, and they grabbed 12 State legislature seats from Republicans.

Still, few analysts would have projected this summer that Joe Biden could be the first Democrat to win a Presidential vote in Texas since 1976.

That has changed with the erosion of Trump’s lead in a series of polls. Early voting has been unprecedented in volume, already surpassing Texas’s entire count in 2016, and Biden’s running Kamala Harris visited Houston on Friday, the first campaign stop in the state by a Democratic Vice Presidential nominee since 1988.

If Texas goes Democrat, then Biden will have landslide, Democrats will likely take control of the Senate, and any Trump plan to defy the outcome of the election will be quashed.