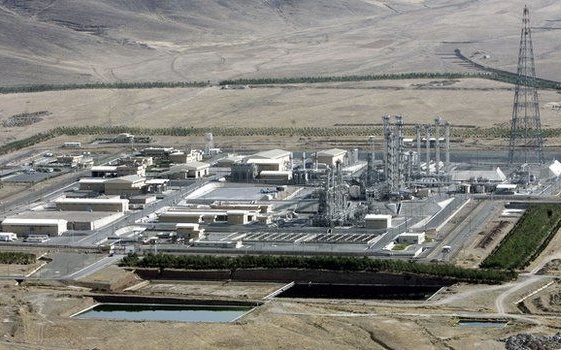 The nuclear facility at Natanz in central Iran

Trump made the enquiry in an Oval Office meeting last Thursday, a day after the International Atomic Energy Agency reported an escalation in Iran’s stock of low-enriched uranium, according to “four current and former US officials”.

The advisors talked Trump out of any missile strike or cyber-attack, warning of the danger of a wider conflict. They included Vice President Mike Pence, Secretary of State Mike Pompeo; Acting Defense Secretary Christopher Miller; and Gen. Mark Milley, the chairman of the Joint Chiefs of Staff.

Officials left the discussion believing that a missile strike is now off the table, but they said Trump might be considering attacking on Iranian allies, including militias in Iraq.

In early January, a US drone strike assassinated Maj. Gen. Qassem Soleimani, the head of the Quds Force of the Revolutionary Guards, outside Baghdad International Airport. Reports say that Israel — at the behest of the Americans — killed the deputy head of Al Qa’eda, Abu Mohammed al-Masri, on August 7 in Tehran.

And Israel is believed to have arranged a bombing inside the Natanz complex in July. Iranian authorities say the building, which held uranium centrifuges, was damaged by an explosive smuggled onto the site by a contractor.

Iran is reportedly building an underground facility in the complex to shield against airstrikes.

The IAEA reported last week that Iran’s uranium stockpile is now 12 times the limit in the 2015 nuclear deal between Tehran and the remaining 5+1 Powers (UK, France, Germany, Russia, and China). The inspectors also say Iran has exceeded the 3.67% enrichment limit, moving to 4.5%, and the Iranians have installed advanced uranium centrifuges.

The Rouhani Government began its suspension of the nuclear deal’s term in summer 2019, following the Trump Administration’s withdrawal from the agreement and imposition of comprehensive sanctions. However, Iran has not returned to its pre-2015 enrichment of 20% uranium, which can potentially be further enhanced to a military grade of more than 90%.

But US officials are concerned about impulsive action by Trump, who fired Defense Secretary Marc Esper last week. Other senior Pentagon officials have resigned or been forced out, with Trump loyalists — including Islamophobic conspiracy theorists — replacing them.