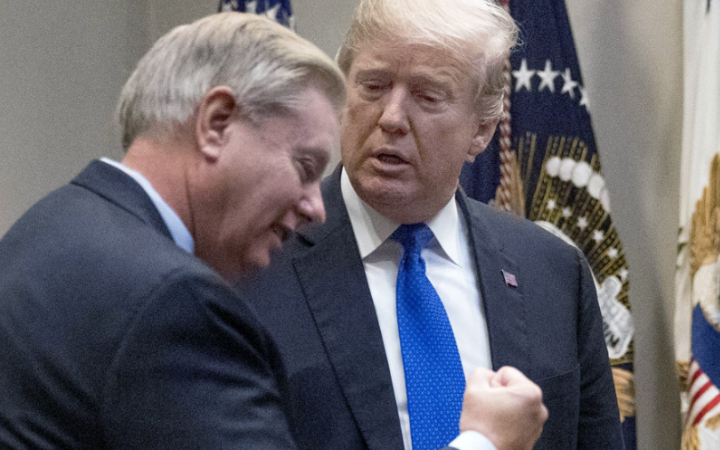 President-elect Joe Biden carried the state, which had voted Republican in every Presidential election since 1992, by 14,205 votes. Georgia’s 16 electoral votes are valuable, but not essential, in Biden’s margin of 306-232 over Trump.

A hand recount of the state’s 5 million votes is being conducted, with the outcome to be confirmed by November 20.

Raffensperger told The Washington Post that Graham, the chairman of the Senate Judiciary Committee, asked about Georgia’s signature-matching law. The Senator queried if political bias might have played a role in counties where poll workers accepted higher rates of mismatched signatures.

Graham then asked the Secretary of State if he had the authority to throw out all mail-in ballots in those counties.

Raffensperger said he was “stunned”: “It sure looked like he was wanting to go down that road” of burying legally-cast mail-in votes.

Graham confirmed the call, but insisted that he only wanted to learn more about the process for verifying signatures: “If he feels threatened by that conversation, he’s got a problem. I thought it was a good conversation.”

The Secretary of State has already been assailed by Georgia’s two Republican Senators, Kelly Loeffler and David Perdue, who each face run-off elections on January 5. Both demanded Raffensperger’s resignation.

Georgia won’t let us look at the all important signature match. Without that the recount is MEANINGLESS. Open up unconstitutional Consent Decree, NOW! @BrianKempGA

And Georgia’s US Rep. Doug Collins, who leads Trump’s efforts to overturn the outcome, delcared that Raffensperger is siding with Democrats because he won’t endorse Trump’s claim of a “rigged election”.

The Secretary of State replied that Collins, who lost in the “jungle primary” for the seat held by Loeffler, is a “charlatan”.

I’m an engineer. We look at numbers. We look at hard data,” Raffensperger said. “I can’t help it that a failed candidate like Collins is running around lying to everyone. He’s a liar.

He explained that every accusation of voter fraud has been thoroughly vetted, with no credible evidence so far that the election’s result is affected. He expects the recount to affirm the outcome.

Raffensperger said he and his wife have received death threats in recent days, such as “You better not botch this recount. Your life depends on it.”

Other than getting you angry, it’s also very disillusioning, particularly when it comes from people on my side of the aisle. Everyone that is working on this needs to elevate their speech. We need to be thoughtful and careful about what we say.