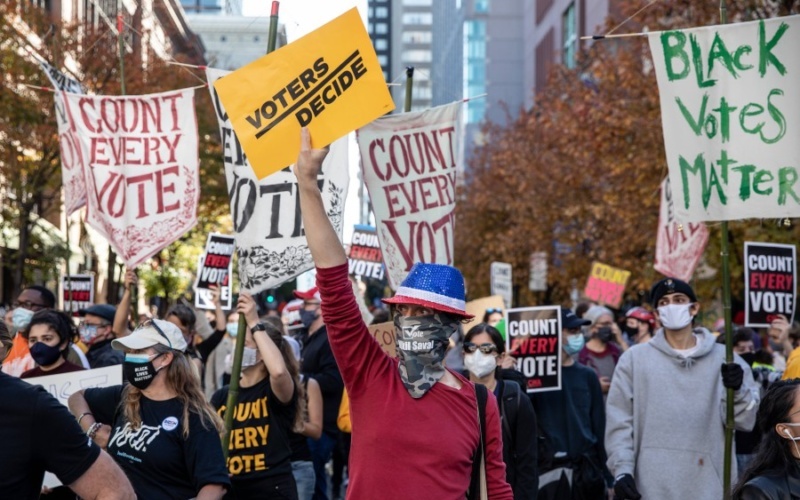 Marchers support the counting of all votes in US elections, Philadelphia, Pennsylvania, November 5, 2020 (AFP)

In Michigan, Republicans on the election board of Detroit’s Wayne County back down after initially blocking the certification of results.

The twin blows are the latest for Trump’s disinformation and legal action as he denies the November 3 victory of President-elect Joe Biden. He ended his Twitter night with the plea that Gov. Brian Kemp of Georgia, a third swing state that voted for Biden, “will hopefully see the light before it is too late”.

The Trump team has now lost 25 of 26 lawsuits in Pennsylvania, Michigan, Wisconsin, Georgia, Arizona, and Nevada. Their only victory, in a lower Pennsylvania court, blocking the count of a few hundred ballots in a state won by Biden with a margin of more than 82,000 votes.

In Pennsylvania, Trump’s attorneys complained that observers were initially kept 15 to 18 feet away from the count. A court order after Election Day changed the limit, imposed because of Coronavirus measures, to allow observers within six feet.

The state Supreme Court found in a majority opinion:

The board did not act contrary to law in fashioning its regulations governing the positioning of candidate representatives during the pre-canvassing and canvassing process, as the election code does not specify minimum distance parameters for the location of such representatives.

We find the board’s regulations as applied herein were reasonable in that they allowed candidate representatives to observe the board conducting its activities as prescribed under the election code.

The two Republican-appointed justices who dissented still disagreed that legal votes should be rejected. Chief Justice Thomas Saylor wrote, “Short of demonstrated fraud, the notion that presumptively valid ballots cast by the Pennsylvania electorate would be disregarded based on isolated procedural irregularities that have been redressed – thus disenfranchising potentially thousands of voters – is misguided.”

Rudy Giuliani, Trump’s personal attorney, appeared in a US Federal Court in Pennsylvania on Tuesday, accusing Democrats in cities of a nationwide conspiracy to steal the election. He provided no election for the claims.

Trump’s team have already narrowed their lawsuit, which originally sought the disqualification of almost 700,000 votes, and an earlier set of attorneys withdrew from the case.

Lawyers for the Pennsylvania Secretary of State, Philadelphia, and several counties asked US District Judge Matthew Brann to dismiss the case. They cited the Trump campaign’s allegations of “at best, garden-variety irregularities” that would not change the outcome of the election.

In Detroit, the two Republicans on the Wayne County elections board refused to certify results, claiming that many precincts had conflicting figures for the numbers of votes cast and the number of voters recorded as participating.

But the ballots involved were a small number, and the Republicans were criticized for a political intervention and disenfranchisement of people of color. Voters, clergy members, Middle Eastern immigrants, Black women, environmentalists, civil rights leaders, and poll workers made statements.

“The Trump stain, the stain of racism that you, William Hartmann and Monica Palmer, have covered yourself in, is going to follow you throughout history,” said Ned Staebler, the chief executive of a high-tech business incubator in Detroit.

The Republicans relented, turning a 2-2 deadlock into an unanimous vote for certification.

The two Republican members of the Wayne County Board of Canvassers refusing to approve the election results in Wayne County is a blatant attempt to undermine the will of the voters. pic.twitter.com/2m8eN6Cfpy

Wow! Michigan just refused to certify the election results! Having courage is a beautiful thing. The USA stands proud!

Trump also proclaimed, “Flip Michigan back to TRUMP” — but he went silent after the certification was confirmed.