Russia and Assad Stage Their Conference on Syria’s Refugees 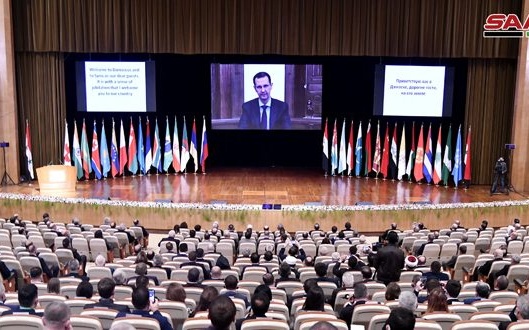 Russia and the Assad regime have staged their one-day gathering on Syria’s refugees, with most of the international community avoiding the public relations event.

Hoping to bolster his legitimacy, even as 5.6 million Syrians remain outside the country and more than 6 million are displaced inside it, Bashar al-Assad tried to blame US sanctions and Syria’s neighbors: “There are many hurdles.”

But two of those neighbors — Jordan and Turkey — as well as the US and the European Union stayed away. Western countries and international organizations say that conditions are not safe for return, with the regime continuing mass detentions and harassment.

Speaking by video to the attendees in Damascus’s Ummayad Palace, Assad railed about refugees forced to stay in host countries by “pressure or intimidation”, claiming that they were being bribed through the states benefitting from international aid. He insisted, without evidence, “The overwhelming majority of Syrians abroad today more than ever want to return to their homeland.”

European Union policy chief Josep Borrell said on Tuesday that, rather than appearing at a conference, “the priority at present is real action to create conditions for safe, voluntary, dignified and sustainable return of refugees and internally displaced persons to their areas of origin”.

Russian envoy Alexander Lavrentiev and the regime arranged the conference in a meeting in Damascus at the end of October. There was no consultation with neighboring countries or the UN.

The total number of Syrians who have lost their homes since March 2011 is almost half of the pre-conflict population of about 22 million.

Earlier this year, Russia ensured the cut-off of UN aid to displaced civilians in Kurdish-controlled and opposition areas of Syria, casting its Security Council veto to close border crossings from Turkey and Iraq.