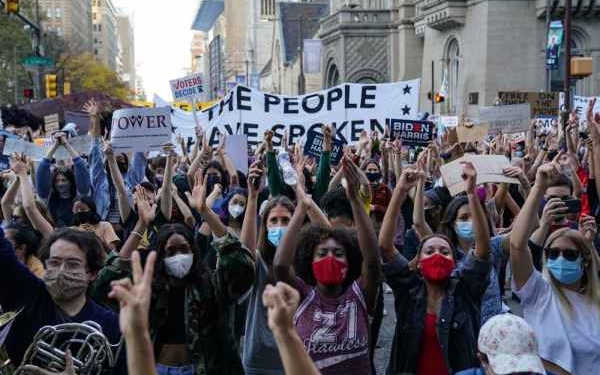 In the latest rejection of the Trump camp’s attempts to overturn the Presidential election, the Pennsylvania Supreme Court upholds 2.5 million mail-in ballots.

On Wednesday, lower court Judge Patricia McCullough blocked certification of some results, but the seven-justice Supreme Court unanimously ruled that the Trump lawsuit was filed months after the time allowed for challenges to Pennsylvania’s mail-in voting law, passed in 2019.

The justices chided the Trump camp’s attorneys, “The want of due diligence demonstrated in this matter is unmistakable.”

Echoing the brusque rejection of Trump claims by other jurists — including by a US Appeals Court in Philadelphia on Friday — Justice David Wecht wrote in a concurring opinion, “They have failed to allege that even a single mail-in ballot was fraudulently cast or counted.”

See also In Pennsylvania, Another Harsh Rejection by US Appeals Court of Trump’s “Stolen Election”

The week-old lawsuit, filed by Pennsylvania Republican Congressman Mike Kelly and other plaintiffs, sought one of two remedies: 1) dismissing the 2.5 million ballots in a contrast won by President-election Joe Biden with a margin of almost 82,000 votes or 2) direct Pennsylvani’s GOP-majority legislature to choose the state’s 20 electors for the December 14 decision of the Electoral College.

Specific allegations were made, and we have massive proof, in the Pennsylvania case. Some people just don’t want to see it. They want nothing to do with saving our Country. Sad!!!