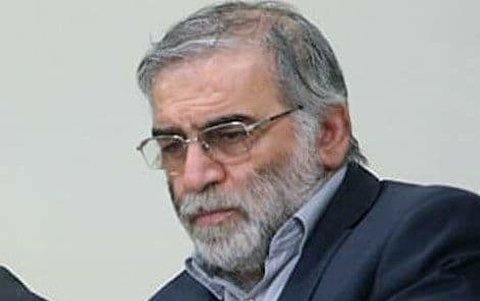 Parliament Speaker Mohammad Baqer Qalibaf has called for a strong response to the assassination of nuclear scientist Mohsen Fakhrizadeh (pictured), without specifying any measures.

The people of Iran have been facing such losses for more than four decades and experience has proven that they have been able to continue the path of their martyrs stronger than before.

But the criminal enemy will not regret it, except with a strong response that both deters the enemy from possible future mistakes and takes revenge on them for these crimes.

An opinion article in Kayhan, whose editor is appointed by the Supreme Leader’s office, does propose a high-profile retaliation: it calls for an attack on the Israeli port of Haifa if the regime concludes that Israel killed Fakhrizadeh.

The statement differs from Ayatollah Khamenei’s public line, avoiding an instruction for retaliation while calling for an investigation into the assassination.

In his first comment on the killing of nuclear scientist Mohsen Fakhrizadeh, the Supreme Leader — following the line of his military aide — has refrained from a call for retaliation against Israel.

Instead, Ayatollah Khamenei called for an investigation of the assassination and continuation of Iran’s nuclear research program.

All relevant administrators must seriously place two crucial matters on their agendas: 1st to investigate this crime and firmly prosecute its perpetrators and its commanders, 2nd to continue the martyr’s scientific and technological efforts in all the sectors where he was active.

Addressing the National Coronavirus Task Force, President Hassan Rouhani condemned Israel but also held back from a call for action.

Once again, the evil hands of global arrogance were stained with the blood of the mercenary usurper Zionist regime. We will respond to the assassination of Martyr Fakhrizadeh in a proper time.

The assassination of martyr Fakhrizadeh shows our enemies’ despair and the depth of their hatred….His martyrdom will not slow down our achievements.

Through its UN envoy Majid Takht Ravanchi, Iran has written UN Secretary General Antonio Guterres that there are “serious indications of Israeli responsibility”: “The Islamic Republic of Iran reserves its rights to take all necessary measures to defend its people and secure its interests.”

One US official and two other intelligence officials from unnamed countries told The New York Times that Israel is responsible for the assassination.

Iran’s leaders have stepped back from an immediate response over the assassination of the head of its nuclear program, Mohsen Fakhrizadeh.

President Hassan Rouhani said that the Iranian nation is “wise enough” not to fall into “Israel’s trap”, and that Tehran will respond “in an appropriate time”.

The Supreme Leader’s military aide, former Defense Secretary Hossein Dehghan had declared on Friday that Iran would “descend like lightning on the killers of this oppressed martyr”.

But this morning, he tweeted, “While call for revenge is legitimate, Iran will act in a smart way and won’t leave this unanswered, we’ll determine when and where to respond.”

Last weekend, after Israeli missile stikes on Iranian positions inside Syria, the Foreign Ministry pledged a “crushing response” and taunted that Israel was being “very cautious”.

Converging statements from Iran and Israel point to Israeli responsibility for the assassination of nuclear scientist Mohsen Fakhrizadeh.

The head of Iran’s military, Maj. Gen. Baqeri, said the assassins are “affiliated with Israel and the Global Arrogance“. He said “harsh revenge awaits those” who ordered and executed the killing.

Prime Minister Benjamin Netanyahu appeared to acknowledge Israel’s role, saying in a video of supposed achievements of the week that it was “a partial list, as I can’t tell you everything”.

Meanwhile, Iranian Defense Minister Amir Hatami came up with a new job description for Fakhrizadeh: he claimed that the physicist led the Ministry’s anti-coronavirus projects, producing homegrown diagnosis kits and a vaccine at human trial stage.

Fakhrizadeh was ambushed about 2:30 p.m. in Absard, 70 km (43 miles) east of the capital Tehran. An explosion was heard, and then gunshots. He was taken to hospital but doctors could not save him, according to State TV.

Witnesses said the blast in the SUV with the gunmen, after they left the vehicle, threw the car door 200-300 meters away. They then emptied their weapons into the scientist’s car.

The Iranian Defense Ministry confirmed Fakhrizadeh’s killing after initial denials by the Atomic Energy Organization. Hossein Dehghan, an advisor to the Supreme Leader and former Defense Minister, tweeted, “We will descend like lightning on the killers of this oppressed martyr and we will make them regret their actions!”

This photo, by Tasnim, shows the Nissan pickup which was blown up to stop #Fakhrizadeh car pic.twitter.com/y7r1rZKIvG

Four Iranian nuclear scientists were assassinated between 2010 and 2012, with Israel the chief suspect.

“Remember that name, Fakhrizadeh,” Netanyahu said in his presentation, accusing Iran of hiding and expanding its nuclear weapons program.

A spokesperson for the Israeli military said, “We don’t comment on reports in the foreign media”. Netanyahu’s office repeated the line.

In August, Israel reportedly carried out the assassination of Al Qa’eda’s second-in-command, Abu Muhammad al-Masri, on a Tehran street. Two gunmen shot al-Masri, accused of being the organizer of the 1998 attacks on US Embassies in Kenya and Tanzania.

Four officials said the operation was carried out at the request of the Trump Administration.

In early January, the US military killed Maj. Gen. Qassem Soleimani, the head of the Quds Force of the Revolutionary Guards, in a drone strike outside Baghdad International Airport.

Fakhrizadeh became head of Iran’s Physics Research Centre in 1988, and then of its successor, the Institute of Applied Physics. A brigadier general in the Revolutionary Guards, he was a professor of physics at the Guards-linked Imam Hussein University.

The scientist was sanctioned by the US. He has not been interviewed by the International Atomic Energy Agency, but is named in one of their reports.