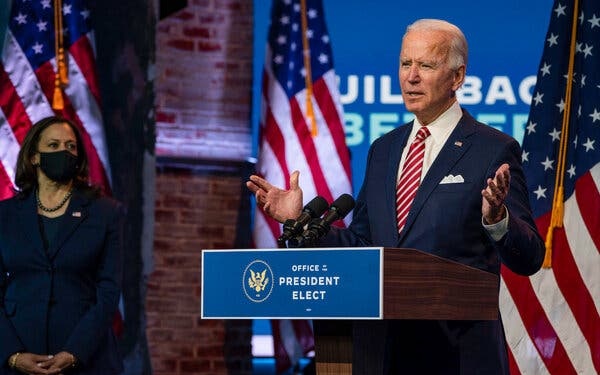 President-elect Joe Biden has warned that “more people may die” in the Coronavirus pandemic if Donald Trump continues to block a transition of power.

Echoing medical and public health experts, Biden said in a press conference on Monday, “We are going into a very dark winter. Things are going to get much tougher before they get easier.”

He said news of a possible vaccine, in successful trials by the pharmaceutical companies Pfizer and Moderna, was “really encouraging” but noted that it is essential to arrange mass distribution.

The vaccine is important. But it’s of no use until you’re vaccinated. It’s a huge, huge, huge undertaking,” he said.

If we have to wait until January 20 to start that planning, it puts us behind. More people may die if we don’t coordinate.

Monday’s increase of 165,973 was one of the highest daily records, continuing the trend of more than 100,000 this month.

However, with Trump focusing on his Twitter rage and spreading disinformation about a “rigged election”, his staff are refusing to meet with Biden’s team. The head of the General Services Administration, Emily Murphy, has still not signed the “ascertainment” letter which launches the process over discussions, offices, and equipment.

Rather than working to combat the virus, which is spreading faster than ever and on average killing more than 1,000 Americans a day, Trump has stayed focused on unsubstantiated claims that the presidential election was stolen.

Trump, who has not attended a meeting of the White House Coronavirus Task Force in more than five months, repeated his false claim that his observers were not allowed into Pennsylvania polling centers. He fumed that Georgia, which is carrying out a recount after a Biden victory by 14,205 votes, “won’t let us look” at the process.

And in his most significant comment about Coronavirus, he tried to seize credit for Moderna’s vaccine: “For those great ‘historians’, please remember that these great discoveries, which will end the China Plague, all took place on my watch!”

Biden to GOP: “I Will Work With You”

Dr. Michael Osterholm, a medical advisor to Biden, said on Sunday, “We are in a very dangerous period – the most dangerous public health period since 1918″ when Spanish flu killed an estimated 50 million people worldwide.

Biden tried to reassure that the delay in the transition is “more embarrassing than debilitating”. He has named a 13-member Coronavirus Task Force to make preparations for immediate action upon his inauguration on January 20.

On Monday, he and Vice President-elect Kamala Harris consulted with economic experts and laid out steps to deal with the historic downturn caused by the pandemic.

Praising Republican governors who have implemented measures to contain the virus, Biden reached out to the opposition party:

My message is: I will work with you. I understand a lot of your reluctance because of the way the President operates….

It’s about being patriotic. It’s about saving lives for real. This is not hyperbole.

He challenged Trump’s medical confidante, the neuroadiologist Scott Atlas, who has scoffed at wearing mask and issued a Twitter call for people to “rise up” against the steps for containment: “What are they doing? It’s totally irresponsible.”

We may have policy disagreements but look, if the Biden-Harris ticket is determined to be the winner – and obviously things look that way now – we’ll have a very professional transition from the National Security Council. There’s no question about it.

However, he covered himself with Trump by saying that the transition will only take place “if the current lawsuits don’t work out for the President”.

The Trump team withdrew four more lawsuits on Monday in key swing states, meaning it has now lost or withdrawn 24 of 25 challenges. Its only success has been in a Pennsylvania court, affecting only a few ballots in a state won by Biden with a margin of 73,219 votes.